The bread turned out well!
The recipe originates with one of my good long term friends (L.)
in Michigan as bread machine recipe
for orange-cranberry bread.
I have tweaked it into to a normal bread recipe.
See here for the first time I baked it
as orange cranberry bread.
*
So...
the first time I baked it
I put the ingredients in as the recipe was given to me,
in this order:

1 1/3 c Water 80 F
2 T veg oil
1 1/2 t salt
2 t grated orange peel
1/4 c sugar
4 c flour
2 t dry active yeast
1 c dried cranberries
*
I used the zest of one whole orange instead of measuring
2 t grated orange peel.
*
It made two small loaves and I did
the kneading in my kitchen aid blender
with the dough hook.
*
I think I added the yeast to the water
but I think I forgot to heat the water...
the yeast did not really 'bloom' and my friend
who had tea with me that day I baked the bread
told me how to bloom my yeast.
*
The bread I baked that day was
very good and very heavy, dense.
I am sure this is because the yeast did not
bloom as much.
It was good but if one wants a light fluffy bread,
instead of a more heavy one,
then read on to see how
I did the bread this time ~
this time it was a very fluffy light bread.
*
Here is what I did to have the yeast bloom,
as my local friend so graciously told me:
~ heat up the water until it is warm on the inside of the wrist
(I microwaved it for about a minute)
note: I use spring water for my bread as another friend
from my far-away church told me that spring water
is better to have the yeast live/bloom
~ add 1/2 tsp sugar
~ then add the yeast and stir
~ cover it to keep it warm and it will expand
Note: I used my 8 cup Pyrex bowl for this as my friend said
that the yeast can expand a lot and a large bowl is good;
my yeast did not grow that much but it may matter
to keep it in a bowl of this size for growth and heat. 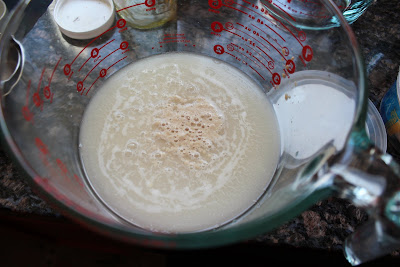 This is what I looked like before I covered it. 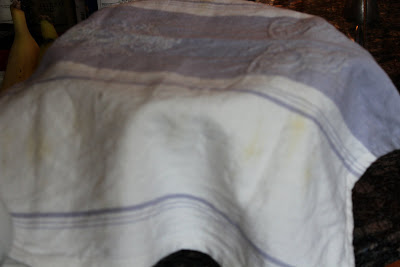 I covered it for quite a while.
I prepared the water, sugar and yeast while
I was making lunch and then we ate lunch
before I got back to the bread. 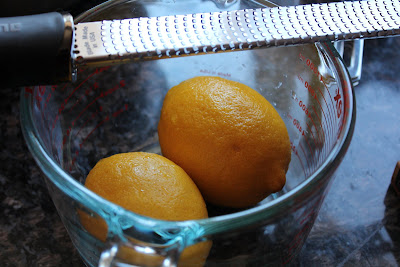 I did a lot of the bread preparation,
leaving the warm yeast water with sugar
covered and waiting.
Mr. Husband is the genius of this recipe
as we had two lemons that I was originally going to
cook/bake with back in earlier February.
He suggested I use the zest in the bread
and make fresh lemon-aid with the rest.
We plan on having the lemon-aid with are dinner;
the zest lemons are waiting in the fridge meanwhile. 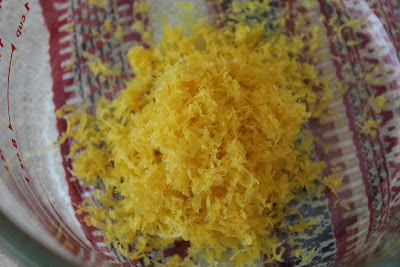 So I used the zest of 2 lemons.
note: I plan on putting the recipe in it's entirety at the bottom
for ease of reproducing it if desired
I LOVE my micro-plane zester that I was given
as a bridal shower gift.
The ease of zesting is a wonderful thing. 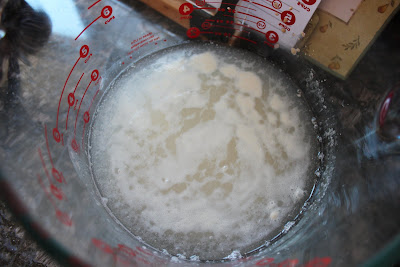 Here's what my yeast looked
right before I put it in;
It was actually more puffy before this but
this is how it was in the end.
It did grow this time for sure. 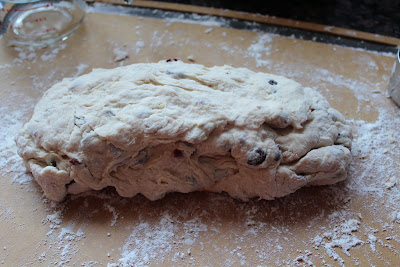 Then I added all the ingredients in order
other than the water and yeast mixture
that I added last.
I then realize I had put it in the wrong bowl as
I planned on using the mixer to knead it.
So I moved it all over and then my mixer did the rest.
Or so I thought.
*
The dough was very different than the last time!
Very moist
(oh, I added up adding a little too much water, so it was
closer to 1 cup and more than 1/3 cup more spring water).
*
I had learned that bread is ready to be kneaded
when it does not stick to one's fingers.
So I was grateful for the mixer for the initial go,
as it got the cranberries and all well mixed.
But then I added more flour until it was
not glomming on to my hands
and sticking there.
I added about 1 cup more flour in the end,
slowly.
As I would turn the bread over in my hands,
rolling it into a round or two rounds
and finding it still sticky,
I would add more flour.
Part of baking bread is getting a literal feel for it
in one's hands and knowing when the bread is ready to
be left alone and covered for the first rise.
*
I let it rise for 1 hour. 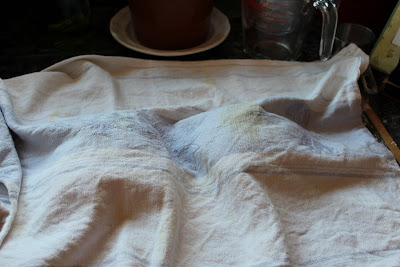 The first rise went well.
Last time it barely rose at all,
this was definitely different,
with the bread clearly rising. 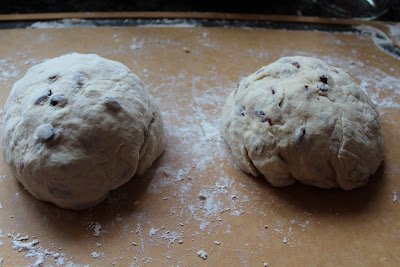 I then punched it down;
I may of added a touch more flour at this time;
basically if it seems sticky again,
I will at least dust it with flour until
it is less wet/sticky.
Then I let it rise again, covered of course.
*
Second rise time was 30 minutes. 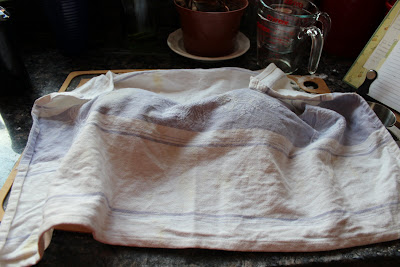 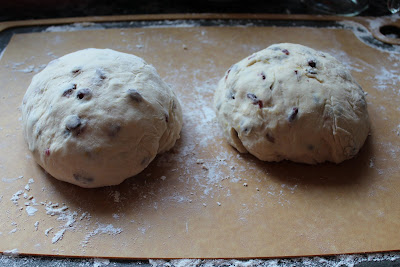 Then the two bread loaves were ready.
I FORGOT again to slice the bread on top
before putting it in!
I have put a note in my recipe book to remind myself...
*
I have not yet gotten the hang of putting the bread,
which by then is on a parchment paper
and carried precariously to the heated oven
to be put on the pizza stone.
There must be a better way than this:
suggestions welcomed please and thank you! :)
*
I put the bread in for 30 minutes.
This bread clearly needs 45 minutes:
after 30 minutes the bread was not yet fully baked,
the bottoms being very wet and soft.
15 minutes later the bottom of the bread was
browned and it had the nice
hollow sound when tapped on it. 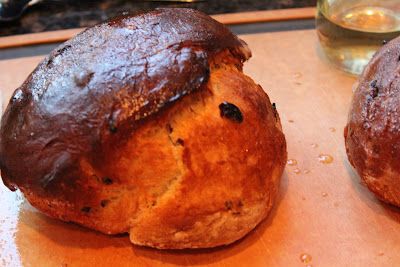 I must remember to cut the tops of the bread
so that the above does not happen!
Kind of funny,
the top of this one was like a lopsided mushroom top.
*
I added sugar to the top of both loaves before baking.
Next time I will use a bit less sugar.
And split the tops before baking.
*
For non-Lenten times
I brush the bread with olive oil
to make it more golden.
This time I used vegetable oil.
The darker of the two loaves went
very dark when I did this. 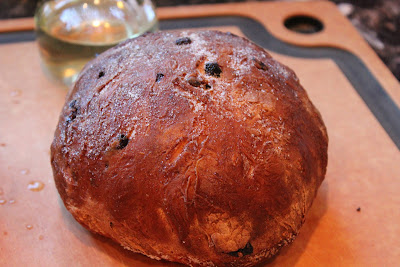 Here's the other loaf (above).
You can see the sugar on top... 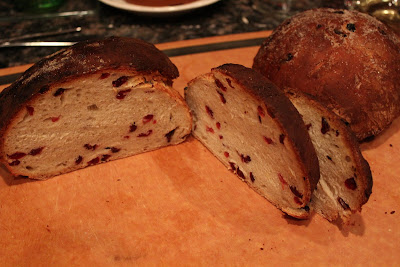 The darker bread,
it cut well and is very soft and fluffy,
at least on the first cut,
just hours after it was baked. 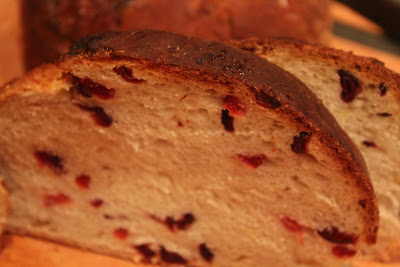 It turned out well!
A much softer bread.
I think I like the bread both ways.
*
I told Mr. Husband that I am going to continue
experimenting with how to do the yeast
to see what will happen to it and the bread.
*
He understood that the sugar was used to feed the yeast.
He commented that I am being a bit of a scientist,
doing bread baking experiments. :) 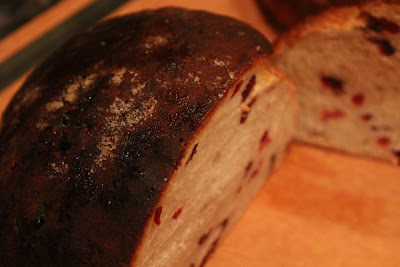 It's a good bread!
Today I am going to have some toasted
to see how it is this way. 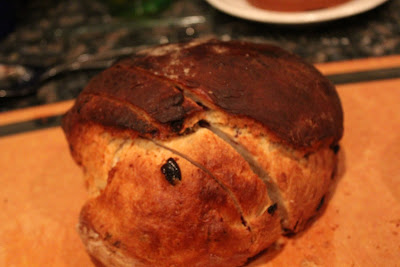 Okay so here is the recipe short and simple
for the
lemon cranberry yeast bread:
*


Step 1:
Warm the spring water until it is not felt on inside of wrist.
Stir in sugar and then yeast.
Cover to keep warm and leave it for a while.
Step 2:
Zest the lemon/s (or orange if you want that instead)
Step 3:
Add all ingredients together,
with the water and yeast mixture added last.
Step 4:
Mix in mixer with dough hook or mix by hand
Step 5:
If still sticky, add flour until it is no longer sticky.
An additional cup of flour is fine to add, but add it slowly to be sure
you do not over-flour the bread.
Knead until ready in two rounds.
Step 6:
Cover with towel and let it rise for 1 hour.
Step 7:
Preheat oven for 30 minutes,
putting oven-safe casserole bowl or pan with water
on bottom rack,
and have pizza stone (if using one) in there.
Note: one of my bread baking friends told me that
she keeps her pizza stone/s in the oven at all times
as it helps the oven have more even heat.
Step 8:
Punch down and reform the two loaves (which I also call rounds)
and let rise for 30 more minutes.
Step 9:
Slice the tops of dough with a sharp knife
and put in preheated oven.
Leave in for 45 minutes.
Step 10:
Take out, see if it sounds hollow when tapped and
the bottom is done, dry, golden.
Step 11: (optional)
Add oil to top immediately to make golden.
*
And then you have lovely
lemon-cranberry yeast bread
to enjoy, as well as a
wonderful smelling kitchen!
Posted by elizabeth at 10:59 am

Wow! What an informative post! Thanks for going to all the trouble to show all the steps too. (:

I use a wooden cutting board to transfer things when they're on parchment paper - just a thought. You can eventually get a pizza peel to do your transferring. I don't have one but it's supposed to work really well.

Your bread looks lovely! Glad to see you baking again. Do take things frustratingly easy for longer than you want to - post-viral syndrome or just getting sick again isn't worth it! Lenten discipline ;)

I haven't used a pizza/baking stone so usually do my last rise in the bread pans, but I agree with Matushka Anna about the bread board to transfer the bread. Or a flat cookie sheet.

I also learned that non-sticky dough is best, but other bakers have other ideas, and I now leave dough much stickier than I used to. I find the bread is moister and even rises better. I'll post a pumpernickel recipe I recently tried very soon - delicious and easy to make fasting (even though it contains coffee and chocolate...)

Thanks Mat. Anna! That is a great idea!

Really - hmmm moist dough in oven - where did you read this? who? do tell! :) looking forward to your blog post!

These photos are great! This post reminded me of SmittenKitchen.com :)

I'd love to try to make that bread sometime!

That looks luscious! I have loads of dried cranberries in my store cupboard, so as soon as I have lemons, I will give it a try :-)

Hi, Elizabeth. I'm so glad you're in the mend! I have a pizza peel, and it does work beautifully. The handle is very helpful when working with such a hot oven, but a wooden cutting board or unrimmed baking sheet as suggested by the others would also serve the purpose.

Thanks all! Great tips on bread transfer - thanks Mat. Anna, Anna and Sarah!

This bread looks incredible- I can't wait to try it! Maybe for Easter morning. Bread is great if you make the dough the night before and throw it in the fridge for the initial rise. I learned once in making sourdough to preheat the oven with a dutch oven (or casserole dish w/lid) inside of it. Let your bread rise in a lightly sprayed and floured bowl, when it's time to cook quickly open the lid of dutch oven, dump the dough in, close the lid and bake. It traps the moisture in and makes the most incredible bread! Thanks for sharing the recipe!