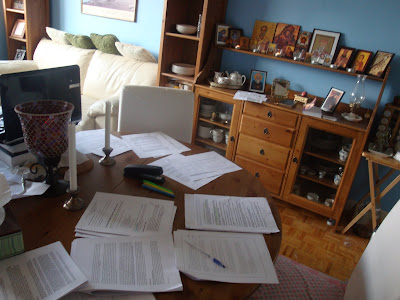 Tomorrow am off with a friend to the near by Greek monastery.

I got beautiful roses for it...

had to take a shelf out of my fridge to keep them fresh! :)

And Monday I start work.

Now if only I had time to clean my place before Monday...

contract work deadline is not always

conducive to my apartment being fully tidy...
Posted by elizabeth at 10:33 pm 10 comments:

Whirlwind of a Weekend

One of my best friends came to town to visit

me and another friend;

we're all Orthodox and met in University

a good 8 years or more ago

and it was so good to be with both of them

Had dinner for my friend and some other friends

for the Feast of the Transfiguration 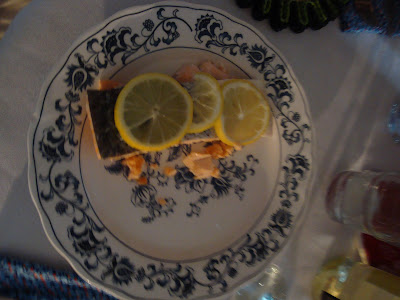 Fresh Salmon with lemon and onion 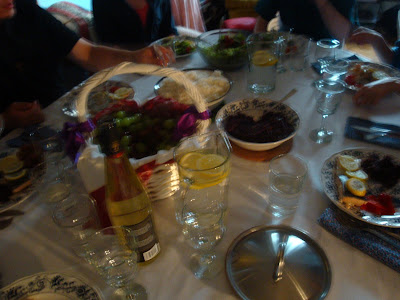 a Basmati and a black mahogany rice in separate bowls

grapes from the feast

and some Turkish Delight. 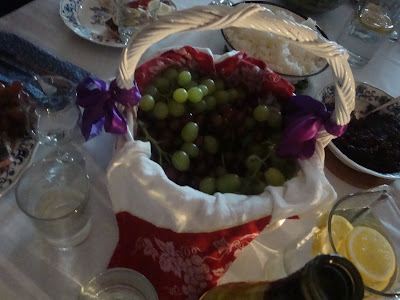 It was a lovely time.

This week will be very full

with finishing up my contract

Am hoping to go to the Greek monastery this Saturday

if it works out with my friend.

and I start my new job next Monday,

So that's what's new with me,

Email ThisBlogThis!Share to TwitterShare to FacebookShare to Pinterest
Labels: God is good and bountiful in His blessings 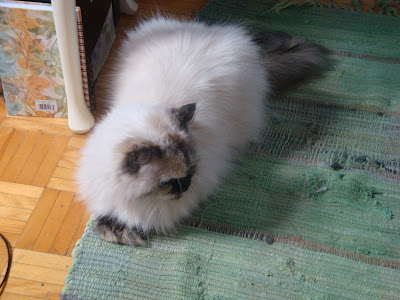 Cleo and I have been enjoying time

together; she's going to really miss me being home

when I start working...

I think I will too; working 5 days a week will be a

big change for me.

FYI, I not only don't have to move for this job,

but I can walk to it!

Super cool in my book :) 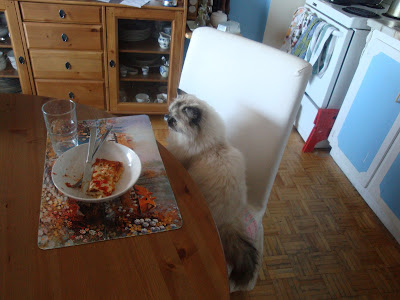 Cleo continues to want whatever food

I set out for myself. 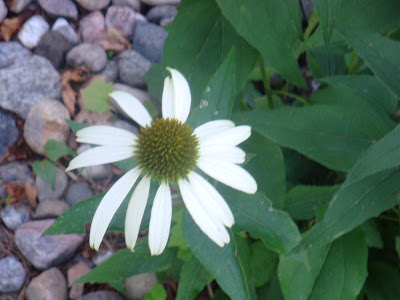 I've been working still on my contract work

and hope to be done soon...

Was really tired after the huge event of

the job offer and acceptance

and have been laying low online...

Still reading everything but sometimes not commenting as much.

Went to Greek Fest with two of my good friends

and two of the Sisters at the Greek monastery were there

so I got to ask prayers, tell them I got a job and

been wanting this book on Fr. George for a while;

I strongly recommend it!
Saint Seraphim Wonderworker of Sarov

I am loving this book on St. Seraphim;

I have another one on him

but this new one I got yesterday has pictures and different

details; I love learning more about St. Seraphim and feel

that this book came at the perfect time for me.
The Lives of the Georgian Saints

This book is very beautiful - hard back, dust jacket

I love Saint books very much.

What have you been loving lately?
Posted by elizabeth at 8:00 pm 12 comments:

consulting with many others,

I have accepted the job

and have cancelled my Monday interview,

based on many factors that made

the job offer a better choice for me. 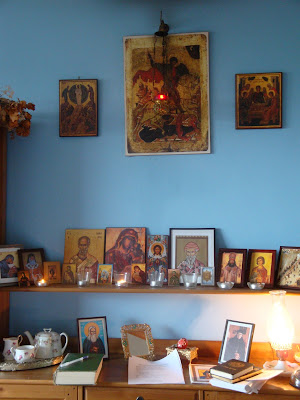 I signed and emailed my letter of offer today;

I signed it in one of my places of prayer,

dedicating this next step to God,

God's protection and the help of the Saints. 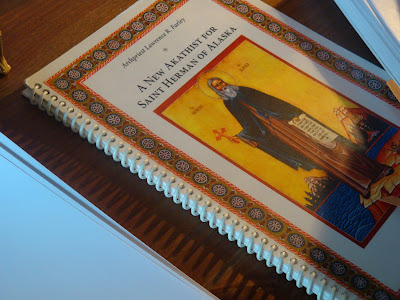 It was very moving when I realized that my chrismation day

St. Herman is a large part of my Orthodox journey;

it was seeing his icon on the iconostasis at

his church out West

that continued to bring me to his church...

even though my chrismation was not as his church,

as I had moved back home by that point,

St. Herman was right there with me...

That I received the job offer on the anniversary

of my chrismation (7 years this past Monday),

prayerfully decide about this decision on

and to accept the offer today,

the old calendar day of my Patron Saint Irene,

is a beautiful timing of events. 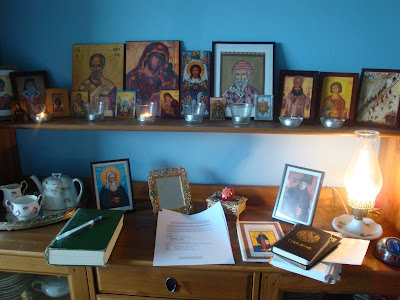 This will be a real change for me,

a change for the better we all pray

and I ask your prayers as I transition to a new

chapter in my life.

Glory to God for His goodness and mercy!

Email ThisBlogThis!Share to TwitterShare to FacebookShare to Pinterest
Labels: Feast of the Dormition of the Most Holy Theotokos, God gave me a job, St. Herman of Alaska, St. Irene of Chrysovalantou 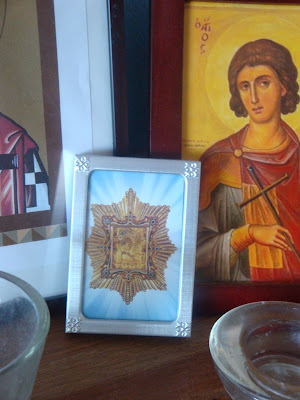 My friend and I asked the prayers of

Late this afternoon I got another call saying

I was officially offered the job.

Unless I get another job offer,

or totally lose peace over it,

I will take the job.

Please pray for me for wisdom as I make

It's been over 2 years since I had full time work.

It would be exciting to see my life starting to turn

around and have this hard period over.

Of course there will be new challenges ahead

but I know that God will be there

Email ThisBlogThis!Share to TwitterShare to FacebookShare to Pinterest
Labels: May the Lord be our support, Saying Thank You, Wow - A Job Offer 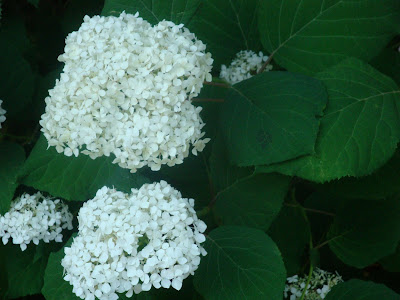 My Grandma is doing well.
Thank you for your prayers.
*
I realize I am not blogging as much currently;
just tired; not at all of my blog but
just in general.
*
Am doing pretty well considering the
heat and the intensity of interviews.
*
The interview I was not sure about has chosen someone else;
I am glad.
I have an interview in a week's time and maybe one
at the end of this week if I made the
second round interview cut.
So just waiting to hear from two more.
I am seeking to trust God for my needs and life.
I covet your prayers.
Posted by elizabeth at 8:07 pm 2 comments:

Email ThisBlogThis!Share to TwitterShare to FacebookShare to Pinterest
Labels: God is good and merciful

Thank you and new prayer request 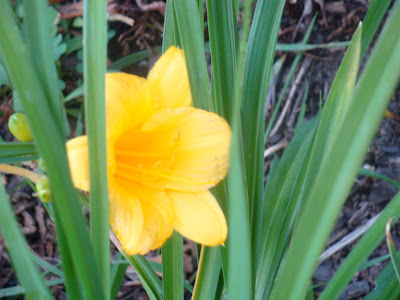 My interview went well I think.
thank you so much for your prayers.

Please pray for my Michigan Grandma -
she is having a fairly minor heart surgery tomorrow
early afternoon.
Thank you.
Posted by elizabeth at 9:48 pm 6 comments: 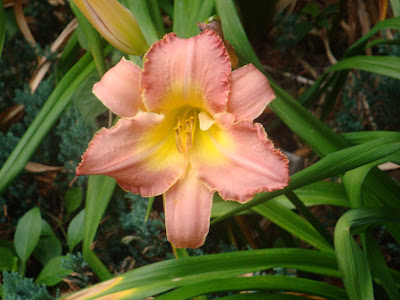 I guess I have to go to the interview tomorrow...
Sigh.
I think I am a bit ready to be not interviewing now.
This one and then one more;
then - we'll see.
*
Asking your prayers.
*
Interview is for two hours (1 hour written) in the early afternoon.
Posted by elizabeth at 8:20 pm 4 comments: