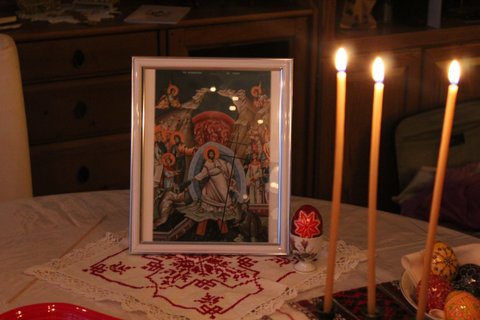 I grew up loving to read books!
By Grade 6 my teacher kindly wrote in my yearbook
that I keep on reading!
And so did, doing an honours BA in English Lit on the
West Coast and taking classes in poetry, creative writing,
old and new literature...
*
By merry happenstance that I was introduced
to the Orthodox church back in Lent 2002.
I simply did not have a ride to my church
and was offered a ride to a local lower mainland
British Columbia church that was Orthodox.
The humour in this how did you become Orthodox?
Oh, I did not have a ride to my own church...
escaped me for sometime...
*
Just over a year later I chose to stay in this church
for the rest of my life.
A pretty heady decision and one that has
shaped everything that has come since.
*
And so I became an Orthodox Christian
who is always dreaming of Holy Week and Pascha.
I lived in Ottawa, Ontario for 7 years before I married
Mr. Husband and my spiritual father there
always said that if you were going to live one week,
Holy Week and Pascha (Easter) is the week.
*
So...I love to read,
write (poetry, nonfiction, blog posts),
bake bread, cook meals for dinner parties.
knit, sew and dream up things to make,
esp. for all the children in my life.
I love my cat Cleo.
I love my Mr. Husband more.
*
I took up knitting in February of 2013
an am loving it.
You can find me on Revelry here.
*
I took up quilting and sewing in the early Spring of 2015.
*
I continued my education
after leaving the Vancouver area,
in London Ontario and
got a Masters in Library and Information Science
before moving to Ottawa,
where I lived and worked for 7 years
until I changed my life to marry
my beloved Mr. Husband
who, like me, grew up in a Dutch Christian household,
and who also loves to read, loves kids,
monasteries and the Orthodox church.
*
I am a Canadian and an American
who lived in the States for the first 20 years,
then about 15 mainly in Canada
and now back in the States for the foreseeable future,
which is never what one thinks it will be
before the future becomes the present.
*
This blog began in 2005 when I was new to Ottawa.
I've done a lot of growing, stretching and changing
in the years and love the friends I have
found through the blog world!
*
I live with Mr. Husband in a bedsitter community of NYC in NJ.
You can contact me here.

Elizabeth, I am a regular reader of your beautiful blog. I connect with your love of books, good tea, wholesome movies and Orthodoxy. I've been Orthodox over 30 years. I LOVE your photos of your projects, that beautiful cat, teapots and food. The recent post about brunch before Apostles' Fast was terrific. Can you tell me what was on the main meal plate, maybe a sauce for the eggs and in the photo of fruit, what is the cream beneath the ? nectarines? Lastly, I am a lifelong bookworm and enjoy other peoples reading lists. Yours are wonderful and I have already read some from your favorites. Is there any chance you have a reading list compiled other than what I can see on the blog? My greatest interests are Orthodox fathers, Lewis, Chesterton and children's classics. Eng. Lit was my grad school major but I abhor most of the junk I was required to read!. Prayers for you and your family and the requests you make in the blog. Please pray for all of us here in West Virginia. God bless you.

Hi Mary,
Hello! Nice to meet you here!
The brunch was at a restaurant near our 'near by' church - the menu for it describes it this way: "grilled chorizo, manchego wedge roasted sweet red peppers, chickpeas and fried eggs on a flour tortilla with smoked paprika hollandaise" the sauce then is the last thing listed! The dessert we had at home, yes nectarines sliced with French Vanilla Ice Cream from Trader Joes underneath! We ended up getting a grocery delivery right before we were going to have our treat of the ice cream, so it melted a bit, which is why it looks like cream instead of 'ice cream'! :)
I don't have a reading list other than under my 'books' page - which is here: https://eroosje.blogspot.com/p/books-2013.html

I hear you about English studies today; it really is a problem!!! I am hoping to reorganize our library soon (I have a cousin coming next week and she is going to help us with some things, DV!) ... I don't have the time to write lists of all the books I own, but we do have a bunch of Orthodox books, lots of Lewis and Chesterton. And some good children's classics too. I read cooking books and some other novels and books as well. Have you read Elizabeth Goudge? based on what you say you like, you would do well to look her up!

Nice to meet you and happy to see you here! God bless! We are praying for those in West Virginia - I hope you will be OK!!! A lady and I were just talking about this yesterday - such horrible flooding! God bless and protect! ~ Elizabeth