Feast of St. Peter and Paul ~ Prayers and Readings 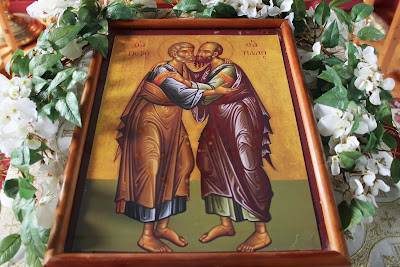 The Holy Glorious and All-Praised Leaders of the Apostles, Peter and Paul

First-enthroned of the apostles,  teachers of the universe:
Entreat the Master of all
to grant peace to the world,
and to our souls great mercy!

O Lord, You have taken up to eternal rest
and to the enjoyment of Your blessings
the two divinely-inspired preachers, the leaders of the Apostles,
for You have accepted their labors and deaths as a sweet-smelling sacrifice,
for You alone know what lies in the hearts of men.

Today Christ the Rock glorifies with highest honor
The rock of Faith and leader of the Apostles,
Together with Paul and the company of the twelve,
Whose memory we celebrate with eagerness of faith,
Giving glory to the one who gave glory to them!
*
Bible Readings for this Feast:

O Master Who loves mankind, illuminate our hearts with the pure light of Your divine knowledge and open the eyes of our mind to understand the teachings of Your Gospel. Instill in us also the fear of Your blessed commandments, that we may overcome all carnal desires, entering upon a spiritual life and understanding and acting in all things according to Your holy will. For You are the enlightenment of our souls and bodies, O Christ God, and to You we give glory together with Your eternal Father and Your all-holy, gracious and life-giving Spirit, now and ever and forever. Amen.

To our shame, I say that we were too weak for that! But in whatever anyone is bold; I speak foolishly; I am bold also.

Are they ministers of Christ?; I speak as a fool; I am more: in labors more abundant, in stripes above measure, in prisons more frequently, in deaths often.

From the Jews five times I received forty stripes minus one.

in weariness and toil, in sleeplessness often, in hunger and thirst, in fastings often, in cold and nakedness;

besides the other things, what comes upon me daily: my deep concern for all the churches.

Who is weak, and I am not weak? Who is made to stumble, and I do not burn with indignation?

If I must boast, I will boast in the things which concern my infirmity.

The God and Father of our Lord Jesus Christ, who is blessed forever, knows that I am not lying.

In Damascus the governor, under Aretas the king, was guarding the city of the Damascenes with a garrison, desiring to apprehend me;

but I was let down in a basket through a window in the wall, and escaped from his hands.

It is doubtless not profitable for me to boast. I will come to visions and revelations of the Lord:

And I know such a man; whether in the body or out of the body I do not know, God knows;

how he was caught up into Paradise and heard inexpressible words, which it is not lawful for a man to utter.

Of such a one I will boast; yet of myself I will not boast, except in my infirmities.

For though I might desire to boast, I will not be a fool; for I will speak the truth. But I forbear, lest anyone should think of me above what he sees me to be or hears from me.

Concerning this thing I pleaded with the Lord three times that it might depart from me.

And He said to me, "My grace is sufficient for you, for My strength is made perfect in weakness." Therefore most gladly I will rather boast in my infirmities, that the power of Christ may rest upon me.

When Jesus came into the region of Caesarea Philippi, He asked His disciples, saying, "Who do men say that I, the Son of Man, am?"

So they said, "Some say John the Baptist, some Elijah, and others Jeremiah or one of the prophets."

And Simon Peter answered and said, "You are the Christ, the Son of the living God."

Jesus answered and said to him, "Blessed are you, Simon Bar- Jonah, for flesh and blood has not revealed this to you, but My Father who is in heaven.

"And I also say to you that you are Peter, and on this rock I will build My church, and the gates of Hades shall not prevail against it.

Posted by elizabeth at 7:51 pm

Email ThisBlogThis!Share to TwitterShare to FacebookShare to Pinterest
Labels: Feast of St. Peter and Paul, Our Faith @ home, prayers