Coon Bars and other baking 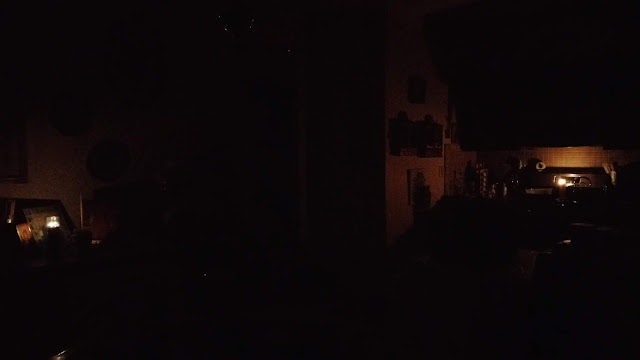 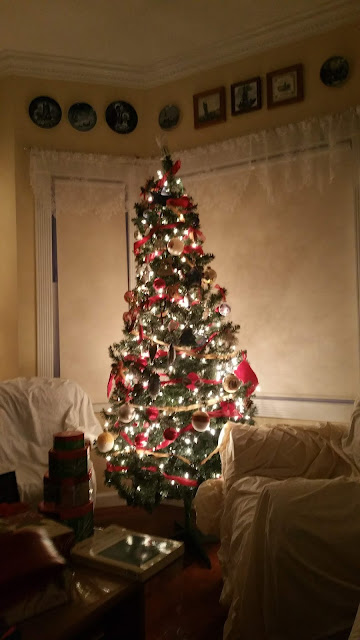 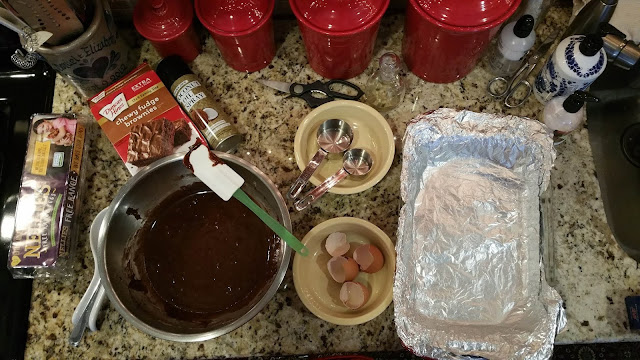 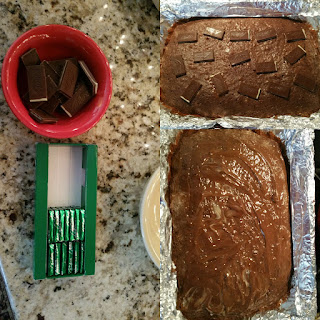 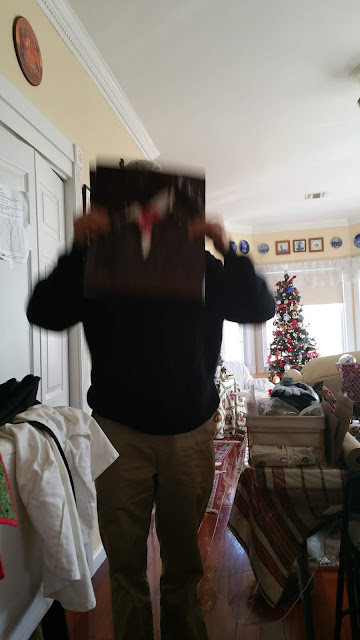 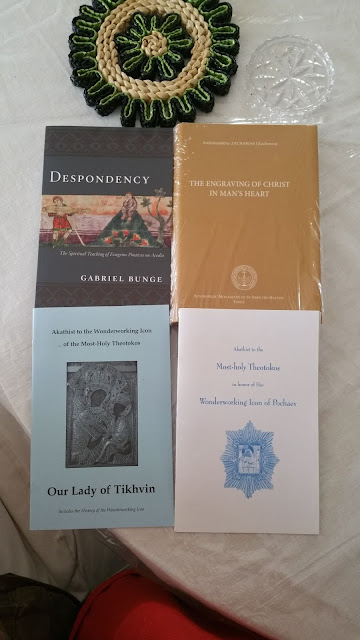 After this, my beloved Husband came in singing happy birthday to me
and had a bag with these gifts for me! I have the best Husband!
(Since my birthday was last Saturday and we were still in Michigan,
we waited until now to have gifts. .!) 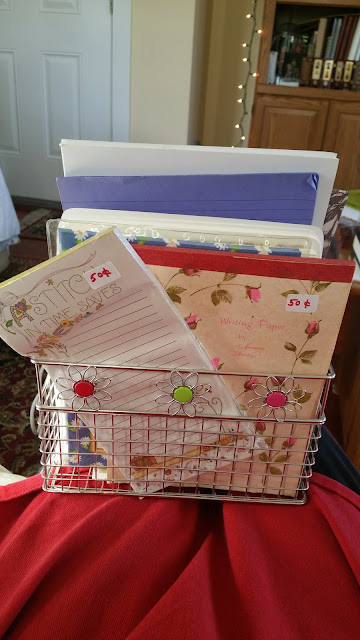 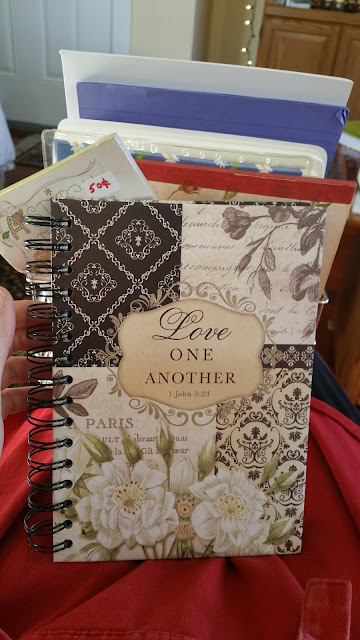 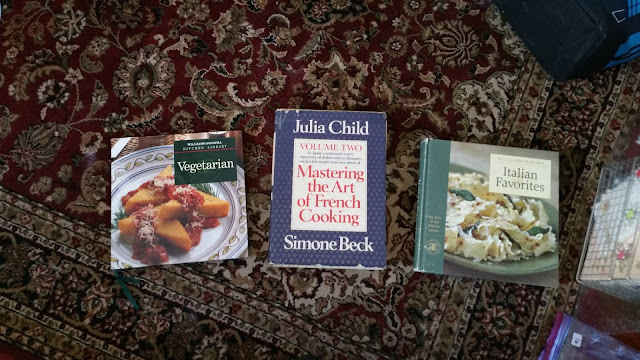 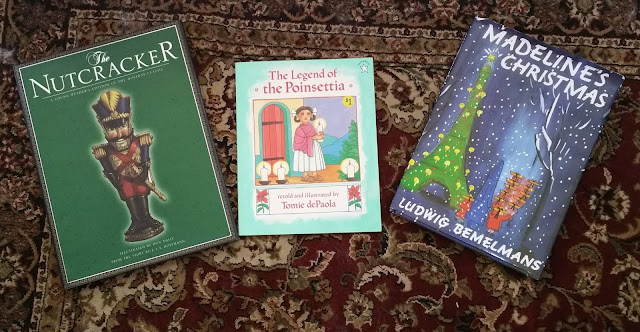 Annual VNA garage opening of cans that were in storage to be sure of no bugs!
A batch of various stationary paper, a cute basket and a lovely journal
that I think I will use as a daily thanksgiving journal like I have done in past years!
I also got some cookbooks and Christmas kid books! 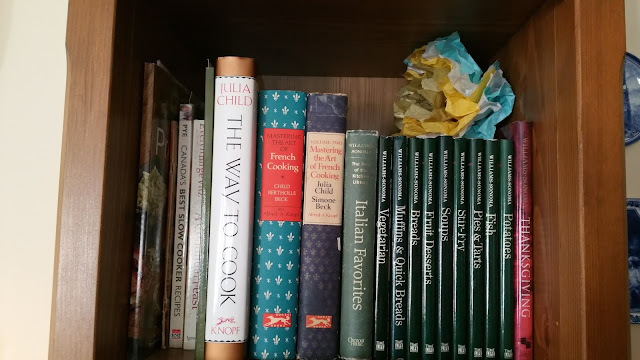 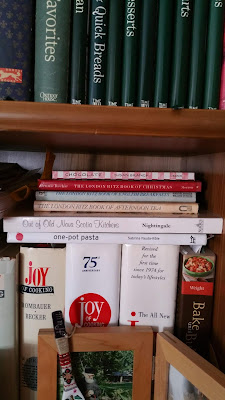 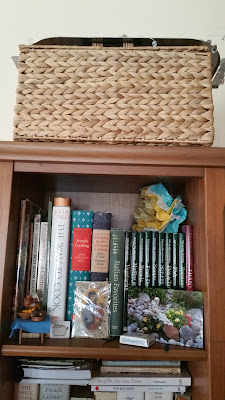 I had fun rearranging my cookbooks! 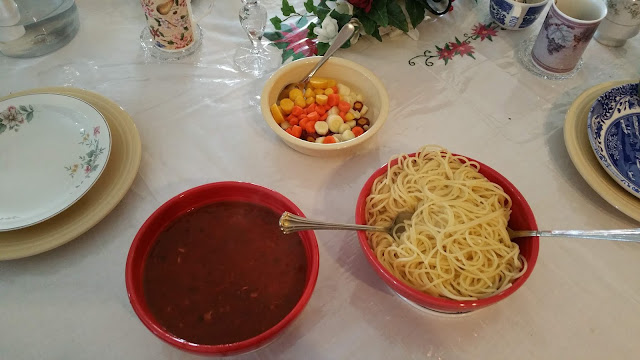 I am realizing how much I love pasta and pizzas during fast seasons...
So was excited to see that my W-S book on Italian food had a lot of
vegan options for fasts... 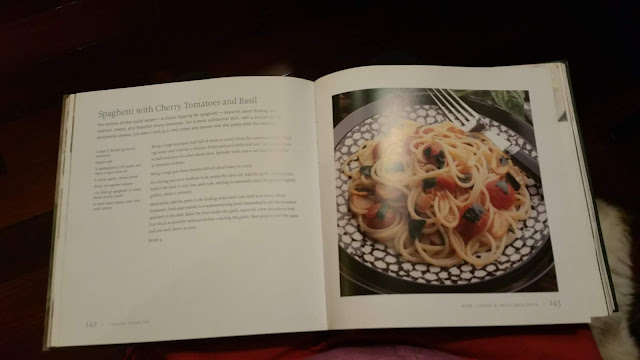 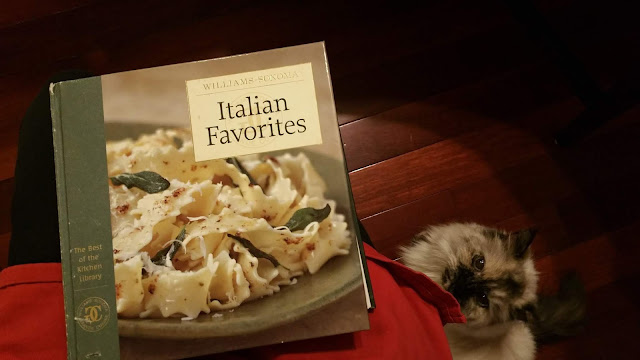 Cleo I think was more undecided in the topic :) 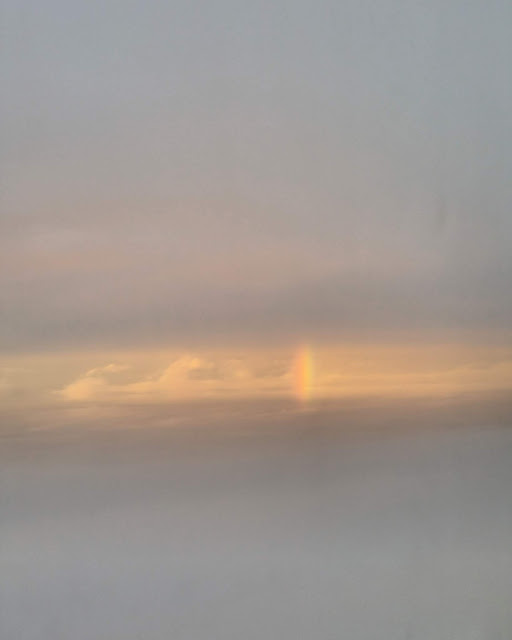 This was a rainbow up high in the sky that I saw a few times
when we were flying back home to NJ yesterday! 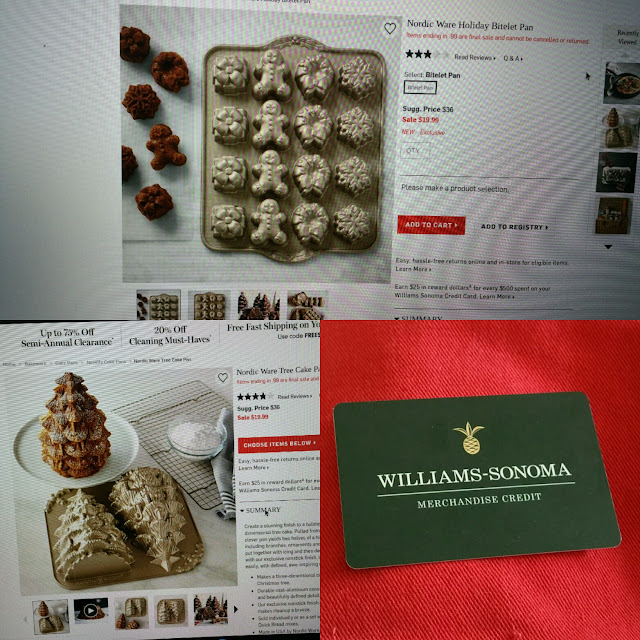 I've had a 30$$ gift card for Williams-Sonoma for 4 years....
saw these two things on sale,
with the gift card I only had to pay 12.62 more for the 2 pans!
Future Christmas baking awaits, God willing! 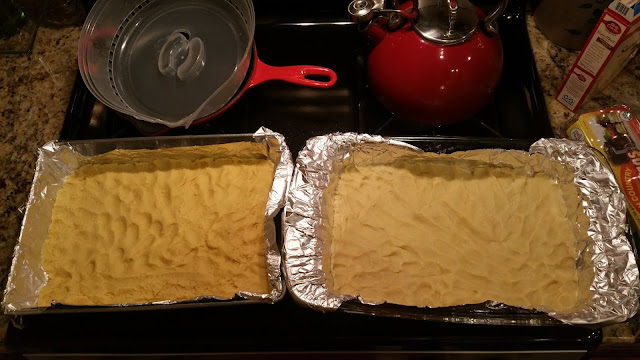 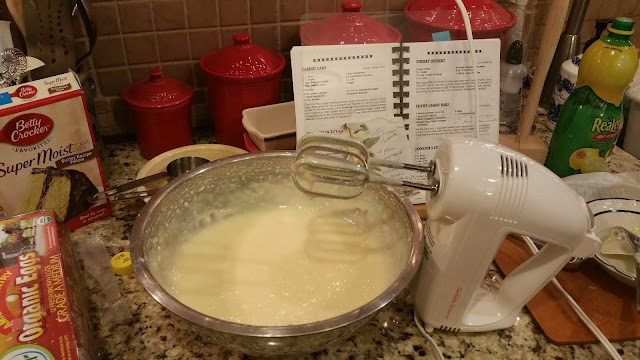 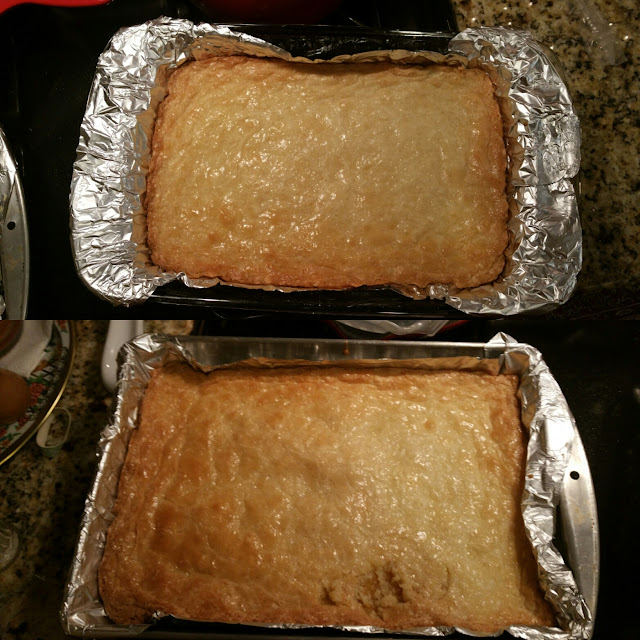 I wrote this earlier about the lemon bars I made:

On Friday my Grandma told me of my +Aunt Karen's creamy lemon bars (my Mom said she called them Coon Bars as the Raccoons liked them! and I remember my Aunt Karen talking about Coon Bars) ... so... when I realized that I did not have either the cake mix with pudding (don't know if that is made anymore...) for an orange cake that sounded good, I was going to make a cinnamon cake instead, with yellow cake mix that I had (time is of essence right now) but no instant pudding in house or at corner stores when my Valiant Husband went to look. So then I thought of my Church spiral bound cookbook section (I have two narrow bookshelves with cookbooks) and sure enough, a cookbook I got years ago from my Sister and brother-in-law had the 'lemon gooey bar' (as it was called there) recipe. Then I called my Mom and she corrected me on some points (the recipe said 1 cup of powdered sugar but I was sure my Grandma said 1 LB of it and I was right in that my Grandma DID say so) and then I double checked a similar recipe online and added 5+tbs of lemon juice to the cream cheese topping as it was not a lemon cake mix and I really wanted the LEMON taste in it! So now a double batch is in the oven. I say that this is a very much a family group recipe and event even though I was alone making it... yet my +Aunt Karen, my Grandma, my Sister and my Mom were all involved and that makes me very happy!!!

I also baked one batch of brownies that I melted half a box of Andes chocolate mints on top of (once they were out of the oven), which was an idea stolen from the chocolate mint cookies that my cousin M. makes. So all in all, my baking had many family MI connections! Even the cookbook my sister gave me was from a church in Michigan...


***
Tonight I read more of Tolkien's letters to Mr. Husband.
So lovely!
I did at least 2 loads of dishes in the dishwasher today!
It was a very busy day with baking, making meals for us to eat
and getting the VNA things out, etc.
But it was a good day.
I also did paperwork (20 minutes of work) for Mr Husband.
We still have some unbloggable stuff to face in the coming months and weeks
and ask your prayers.
Tomorrow I hope to bake cookies and have enough to have a baked gift for everyone...
It's tricky to know when one has enough, esp as our church is growing.
I really want to do the tea gift too but that may have to wait till next week,
we will see.  I have not checked the vanilla I am making either...
Well, one thing at a time, right?
I have a bit more wrapping to do as well, plus I want this house clean and ready to go...
so a lot to do but praying that God continues to give me the strength and that
we don't get sick, as we have in years past between now and summer!
***
I keep hoping that one of the 12 days of Christmas will be a 'veg out' day for me
and that I can have rest.
Next week is already seeming very full, start to finish, but we will see.
But the week after seems to have some wide open spaces so hopefully
I will be able to do some resting then!
***
May God bless each of you and help us in all we are facing and doing!

You do a lot of baking and I see you have quite a cookbook collection. I think browsing through cookbooks can be as interesting as reading a novel.
Speaking of books, I have a book of letters written by C.S.Lewis but have not seen one of Tolken's letters.

You have been so busy lately, I think you need to claim that one day of rest!

Granny Marigold, yes, I love to bake and cook! I love cookbooks! They are really fun to read and browse! Yes, they can be as interesting as a novel!
The book of letters by Tolkien is this one: https://www.amazon.com/Letters-J-R-Tolkien/dp/0395315557/

Elizabethd - yes, I think so as well!!! rest is so important after a really busy season!

So much baking! What wonderful blessings your treats will be.

A belated Happy Birthday to you, Elizabeth!