Leave-taking of the Feast of Holy Transfiguration 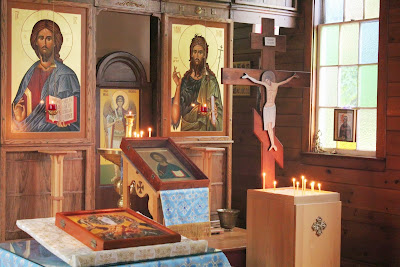 "Why did our Lord not manifest His divine glory on Tabor
before all the disciples instead of before three of them?
First, because He Himself gave the Law through the mouth of Moses:
"At the mouth of two witnesses
or at the mouth of three witnesses,
shall the matter be established" (Deuteronomy 19:15).
Therefore, three witnesses are sufficient.
These three witnesses represent three main virtues:
Peter Faith, for he was the first to confess
his faith in Christ as the Son of God;
James Hope, for, with faith in the promise of Christ,
he was the first who laid down his life for the Lord,
being the first to be slain by the Jews;
John Love, for he reclined on the bosom of the Lord
and remained beneath the Cross of the Lord until the end.
God is not called the God of many but rather the God of the chosen.
"I am the God of Abraham, the God of Isaac and the God of Jacob"
(Exodus 3:6). God often valued a faithful man more than an entire nation.
Thus, on many occasions,
He wanted to destroy the entire Jewish nation,
but because of the prayers of righteous Moses,
spared that nation to live.
God listened more to the faithful Prophet Elijah
than to the entire unbelieving kingdom of Ahab.
Because of the prayers of one man,
God towns and people.
Thus, the sinful town of Ustiug
was to be destroyed by fire and hail
had it not been saved by the prayers of the one and only righteous man in it,
St. Procopius, the "fool for Christ" (July 8)."
~August 19 Prolog of Ohrid
Posted by elizabeth at 10:00 am

Email ThisBlogThis!Share to TwitterShare to FacebookShare to Pinterest
Labels: Leave-taking of Holy Transfiguration