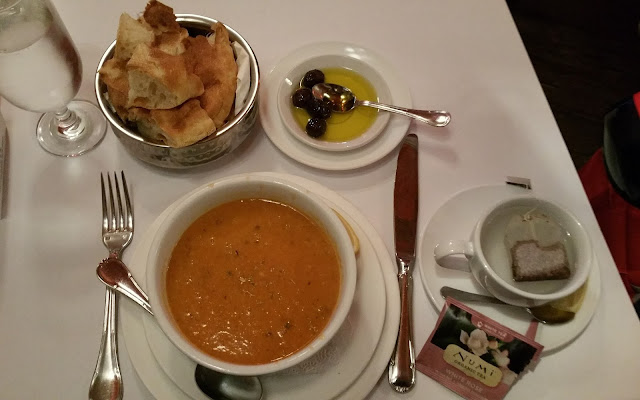 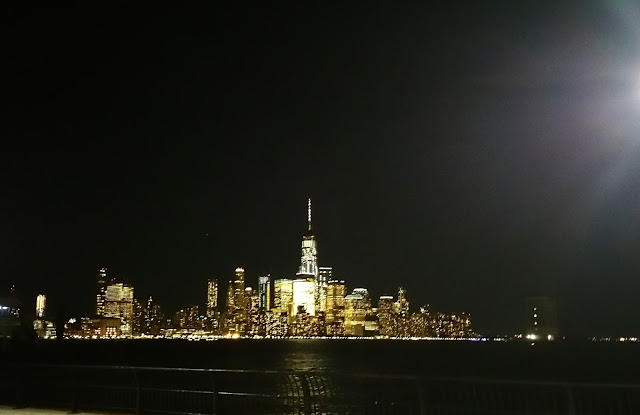 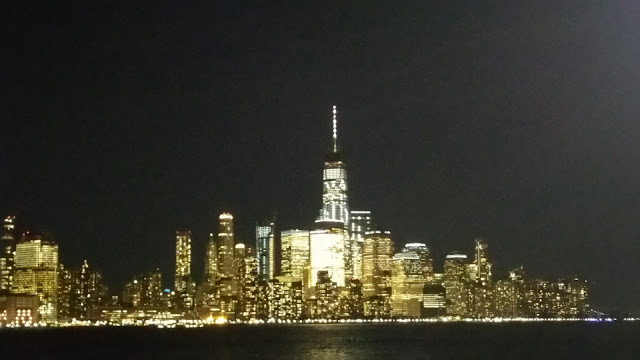 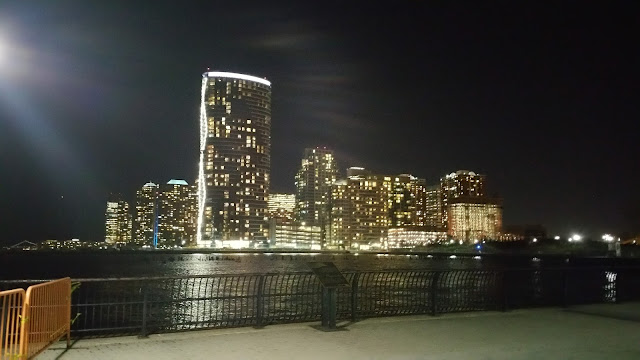 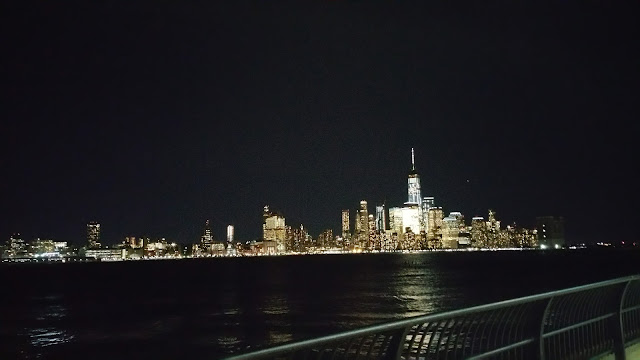 I made it to NYC!
It was my day to finally begin to make sense of the subways.
I had some bad experiences early on in my time in NJ
when I took subways the wrong way or got lost in the cavernous rooms
with many ways out and if you took the wrong one,
it could really turn your sense of place around.
It's super easy for me to get lost, so that it worked today,
was a real blessing.
I knew it was not hard, but today it clicked more into place.
I am thankful.
***
I had some wonderful lentil soup and bread.
I made it to Trader Joes and got 2 (frozen) cranberry pies!
***
My Husband and I had dinner together in NYC
before we headed back home... we took the train that
is more predictable in having a seat to sit down on,
so we took a train on the NJ side after the PATH train getting home.
So the pictures of NYC are from the train station in NJ looking at NYC.
***
I had an interesting taxi ride. I often talk to the cabbies. It's something
I actually really enjoy.  The first one was from Africa and he talked about how
people have to be in less of a rush and take care of their health over
rushing around everywhere. So very true.
Another one had all sort of views on spiritual topics... I found myself
in conversations about life after death, creation, God and many other things.
I am glad whenever I hear of others trying to figure out the big questions
and think about them.  It was clear that his man was not always well received in his
ideas, from what he said; I found that sad. We should encourage others,
especially when they are trying to grapple with big questions.
***
On a different topic....
I got an email (so did many other alumni!) from my undergraduate University.
I graduated from Trinity Western University with a degree in Honours English.
I am standing with them now in prayer and ask for your prayers as well.
I don't get into world events much on my blog, to say the least,
but they are fighting for the freedom to be a Christian and not be
discriminated against.  It all started when they wanted to found a law school...
and found a fight on their hands...
And the fight is at the Supreme Court of Canada in about 2 weeks.
I sincerely ask your prayers.  You can read about it here or here
and here's a great article from TWU's president on what is at stake.
Sometimes I think whole books should be written on the fact that
to believe in traditional values does not mean hatred or that one
cannot love those one disagrees with. My goodness,
it is so clear from the New Testament that one is to have a clear answer
for what one believes and to speak with love, gentleness and courage.
***
Well, I began reading another book, it's such a relief to be able to read...
I picked up Catherine Marshall's A Closer Walk ...
Marshall's books were very influential ... she was very popular in her day...
it's hard to imagine now, sadly, as what is popular has really changed...
but her books blessed me and it's nice to visit with her, as it were, again
and read her thoughts....
I've been an Orthodox Christian for over 13 years now,
there are a lot of distinctives in Orthodox Christianity that are
different, even startling so, than Protestant Christianity.
But this never means that we cannot learn from each other
or that one can respect and love each other.
This should be obvious of course, but sadly, it is easy to
let differences sideline love and charity.
So, it's been a good visit with this author, I've read about half of it now.
I think one of the big things, that I see in this book and also that I
have been reflecting on a lot is that one never stops growing.
That people are broken, we have, as C. Marshall and her (second) husband
Len wrote, major weaknesses.  But yet she was used by God to
encourage so many through her books.  And her devotion to God
and faithfulness to Him is very evident. I think, in part through
Madeleine L'Engle's books, I have often seen those how are older
(which now means my Grandparents age) will have a lot of wisdom
to share but somehow did not perceive (or perhaps want to see reality) that they too
have their own personal struggles.  What a silly idea I had!
But it's hard to realize all the same; I think the desire to have others
who can give us reassurance in difficult times and cast light when we
are in darkness can be so strong that we don't always want to see
that those very people who can do that in our lives, or who we hope
can do that any rate, are still with their own struggles.
Somehow now I see that many can help and encourage us who
have progressed in the Christian life - but - at the same time -
God can use many in our lives who are still struggling with deep wounds,
with major weaknesses, with huge questions or uncertainty
but that God can still use them to help us or, moreover,
can even use us small ones; at least I am a small one, with, which a lot of weaknesses and struggles.
Isn't it an encouraging thing to realize that God can still use us
and that He loves us even though we stumble?!?
***
I've been listening to this and it has been so nice and peaceful.
I hope you enjoy it too.

Very glad to you've got a grip on navigating the subway! :) It can be a bewildering labyrinth! LOVELY NYC pics!! NYC at night is beautiful. PRAYERS for your university... and for peace and freedom and love. We sadly live in a world where Christian values are being eroded. We have to continue to be an expression of Jesus love always... With Love, In Christ--Tracy

Thanks Tracy! :) Yes, I love all the lights at night! Thank you so much for your prayers. I find this very concerning. Yes, we *do* need to keep loving with Christ's love! :) Absolutely!

Hello Elizabeth, we definitely can't right past wrongs by doing wrong ourselves. This is something I struggle with,as I feel anger and want people who have hurt me to know.

But what is the point? Plus this Christian walk gives us all we need in the Bible,the Holy Gospels,our prayer life and attending church. If I invested my time spent rehashing past hurts in living my faith,I would be much happier and a better Christian.

As always, love your insight.

Christ is our anchor,

Ann Marie ~ yes, part of forgiveness is letting go of that anger, of not needing to let them know; God knows; the more we rehash, the deeper we wound ourselves I have and am still learning!

Thank God for Christ being our anchor, our Hope!!!

I hope the results of going before the Canadian Supreme Court will preserve freedom to pursue their religious education, without forcing them to change. It is a worthy struggle!

the subway system is easy yet hard...I am lucky that my husband knows where to go and I just follow along. When I was with my aunt for a girls weekend, I took charge of navigating the city (because I didn't trust anyone else). I found out that with a map and strategically asking the right person, I can do the subway as well as my husband in NYC. Phew!!