How My Cat Proved the "I can't believe it's not butter" advertising.... 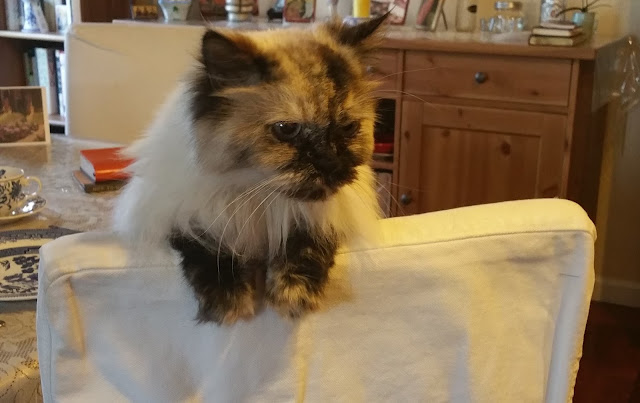 Went to liturgy locally; after breakfast, I whipped up a batch of vegan brownie cookies (double batch of course). I used 1 cup of "I can't believe it's not butter"... well... the name is true apparently, as Cleo *very naughtily* was discovered on the Island (big no-no that she never does) licking the buttered 1 cup bowl! Shame on Cleo!

Upon being found, she leapt off the island and hid, knowing that such naughtiness = spray bottle of water.... I found her and after she has been sprayed with water but I had a hard time not laughing when I saw her licking her lips, *after* being sprayed...!

Apparently she really thought that "I can't believe it's not butter" WAS indeed butter!!!
Posted by elizabeth at 10:14 pm

Too funny! She's a cutie though.

cleo is young at heart and that's what I love about her!

This reminds me of the time many years ago when Smokey was discovered on the dining table happily eating birthday cake. 😃

Cleo is adorable! What a sweet story. I found that my Lilly had done the same thing. I had left the butter in an open container and I saw the "ridged" marks left from her licking the cube. Needless to say, I now always use a covered butter dish. Our little cat people are so cute and I couldn't live without her! Have a blessed Thanksgiving dear Elizabeth. Hugs, Pat

If that tricks even a cat, what a great advertisement!! Maybe I will pick some up today :-)

Ha ha! That's why I don't go in for indoor cats. I don't trust 'em! ;)
Elizabeth, I also wanted to respond to what your hubby said about Madeleine L'Engle being kind of "far-out" spiritually. I agree 100%! It seems like the first few books were not too bad, but they got more far out as they went along. I might even label her as a Universalist. But, as I said, my OCD wouldn't let me stop until I had finished what I started! Sheesh! ;) I think the Beth Moore book will be more edifying.

Lisa, Yes, she really can be that way, you have to take her as a whole. She was really struggling with what it means to be a Christian and at times went a bit far. However, I still love her very much; but I tend to return to some books more than others. She's a really important voice and can help a lot of people (She helped me a lot). You just have to see her as a whole. By the end of The Acceptable Time my Husband said it got a bit better in terms of Christianity, btw. She's uneven but still gives a lot of light to a lot of people in this confused broken world....

You know, I think you're supposed to spray the cat as they are about to do the "dirty deed"; if you spray them after, they don't connect it with what they just did. That's what I've heard/read. I guess, since most of them don't like water, getting sprayed stops them before they do anything. Anyway, considering that, I don't bother with the spraying because who can ever be there *before* they do a thing? It's just impossible. :D But Cleo had a treat for sure!