Painful End to a Happy Journey 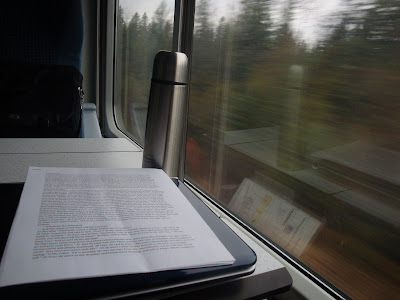 I had a great train ride out. 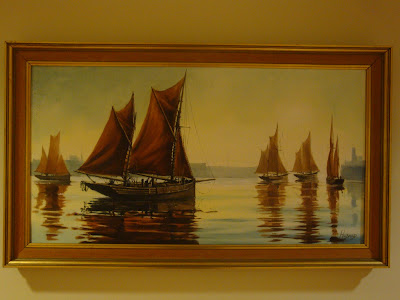 It was so wonderful to see my family;

it felt so normal;

it was hard to believe it had been a year

and three years since we all saw my Oma last time

(I have seen her since but not with my whole family). 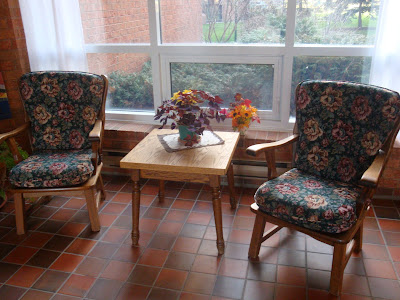 I journaled in the Toronto Royal Bank Plaza

where I had a long lay over before taking a GO Train to Brampton.

I felt that I was on the cusp of a lot of newness in my life.

I felt that the familiar feeling and memories of going home

my studies in my Undergraduate years,

which are now 8 years past,

were really gone but yet I could remember them like they

It was like I was realizing in a new way

that I really was where I am now:

parents nearing or over 60 years old

and about to see my Oma

who was getting more out of breath

It was so good to be back;

but no, it was just that I was hearing voices of

I love Ontario and the Dutch communities and pockets of

many of who came after World War II,

We visited with my Oma

and as my cousin and I were walking to her room,

we had such a nice talk and I felt so

I showed my Oma lots of pictures on my computer

including pictures of me and my

My other siblings showed her pictures as well

and I took pictures of them

My Oma did not want us to leave

but it was time for the nurses to get her ready for bed.

Earlier that day Oma had a really bad spell

where she was pale and really short of breath.

So we all said goodnight,

in Dutch, English and Romanian and kissed her goodnight.

We went back to my Aunt's apartment in the same

complex, a tower or two over

and my cousin's boy and she played songs for us

on the piano and guitar.

We talked and enjoyed being together,

remembering the past, talking about Oma,

eating a Dutch dessert and some Koek,

which is a Dutch spice bread.

my cousin and her boy had already left for home

an hour drive away

and I did my prayers and prepared for bed.

Then suddenly everything changed. 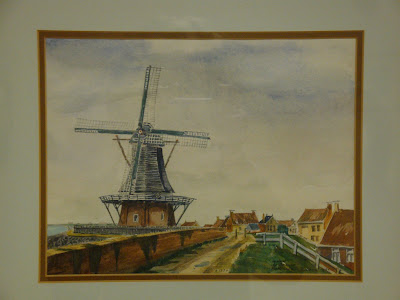 My Mom and her sister closest to her in age

(my Mom is the youngest of 8 children,

came into our room unexpectedly and

said that Oma had fallen,

found there, arms bleeding and

with what they thought was a broken hip.

texted a friend, called another friend

and then did prayers, crying many tears as I know

that often when the elderly fall and break a hip

that they die soon after and

are usually never the same.

My Oma was already showing signs of really slowing down;

earlier that evening my Mom and others were talking

about when our Opa died and one of my Uncles

in the sense of signs particular to her that were

not her usual self.

and that I should stay back and pray.

So I did, with tears.

They did not get back to the apartment until 4:30 AM

and Oma had 4 shots of morphine by that time

and was finally not in as much pain.

My Oma is of solid Dutch stock and very stoic.

Seeing her being wheeled out to the ambulance in

a state of deep physical pain

*
My Dad took me to the train station today.

I was so brokenhearted to leave my Oma

But my Dad and others have to come home today

due to work obligations.

And I fly home on Saturday around noon DV

and have to come back.

Please pray for us

her name in English is Grace.
Posted by elizabeth at 2:39 pm

Email ThisBlogThis!Share to TwitterShare to FacebookShare to Pinterest
Labels: please pray for my Oma and my family, thanking God that I got to see my Oma before she fell and was in great pain

My prayers for your dear Oma Grace indeed. Love to you. My heart is heavy.

I am sure it is a great consolation to your Oma that you were all able to be together for such a wonderful family visit just before her fall.

Elizabeth, I'm so, so sorry. I know it must have been agonizing to have to get back on the train. (((hugs))) I'm glad you have such a happy memory (and pictures too) before this happened. Praying.

that's hard! I will pray. for your Oma and for you.

I'm so sorry to hear this - I'm thinking of you (plural). Wonderful that your Oma had such a lovely day with you all! Big hug.

Praying for your Oma. It must have been so hard to leave.

Praying here for Oma. Prayers for your entire family.

It sounds like you had a lovely visit with her (102 years old)! I'm sorry to hear of her fall. How scary. I will pray for her. May God be with her!!!

Very difficult for her, for you, for the whole family.

May God bless and comfort this dear woman, and you.

Prayers for you and your Oma.

Praying for your dear Oma Grace and for all the family dear Elizabeth. Sending you love.