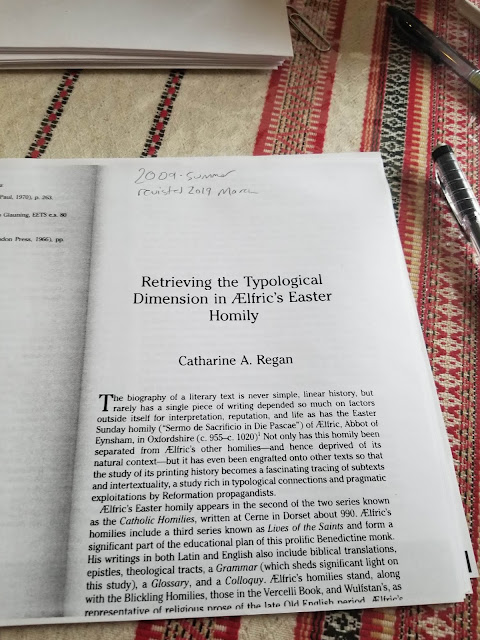 Ten years ago, 5+ years after being an Orthodox Christian,
it was this essay that brought home to me the
changes in theology that happened centuries before...
I began to see how the Eucharist (Holy Communion) was understood
in different ways at different times.  Somehow this all clicked
and I realized that the changes in the belief about God and about
sacraments like Holy Communion / Eucharist changing as Christians
began changing their ideas and making new churches...
I began to see that these changes impact how one sees the world
and in the changes in how one sees the world lead to other changes
that eventually bring us to the current time, 2019 and all the
social changes we have seen in the last 40+ years.
And I began to see WHY these changes are happening...
And that lead to a dream to research this essay, to understand
in particular how one understands the Eucharist / Holy Communion
impacts the whole of one's life and changes and demonstrates a change
in belief, in thought and that changes in belief changes culture.
So that is in part what I am doing now.
Beginning to finally study this, after 10 years of thought about it. 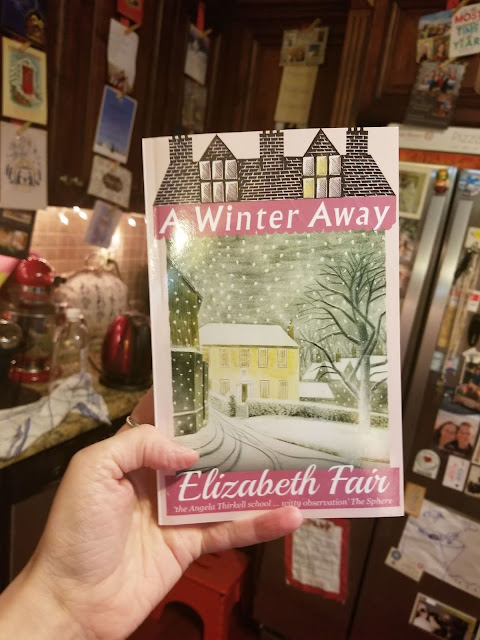 This book so far is so enjoyable.
It's a perfect relaxing read. 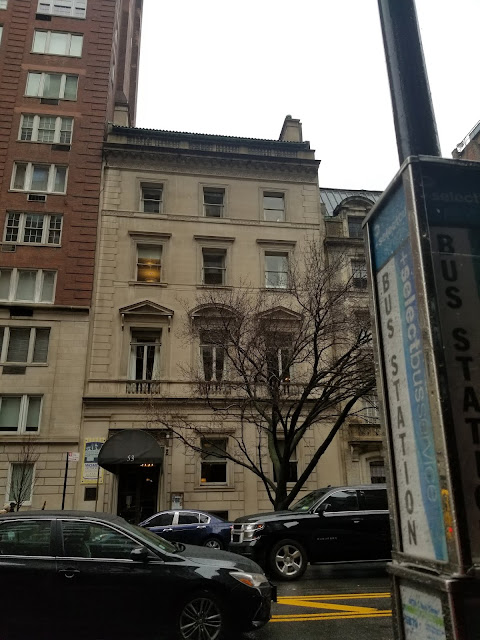 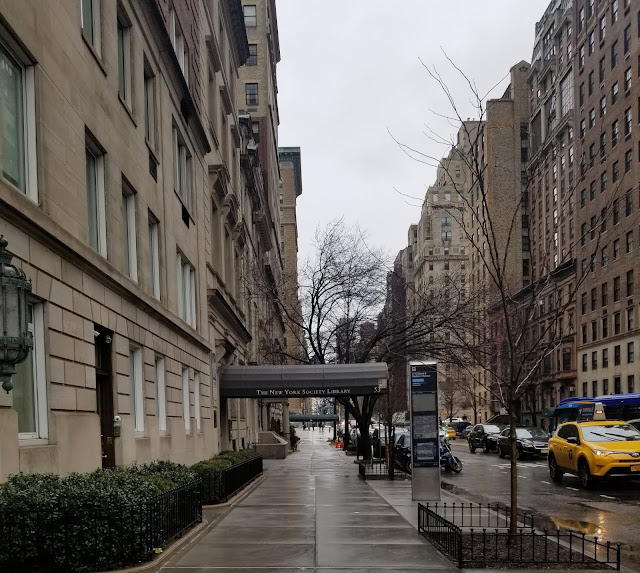 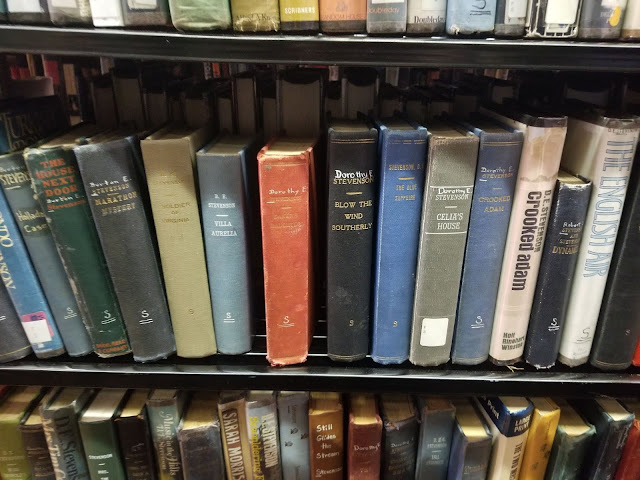 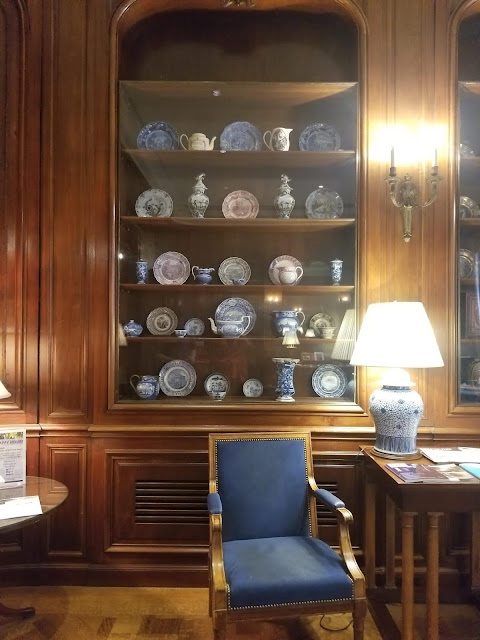 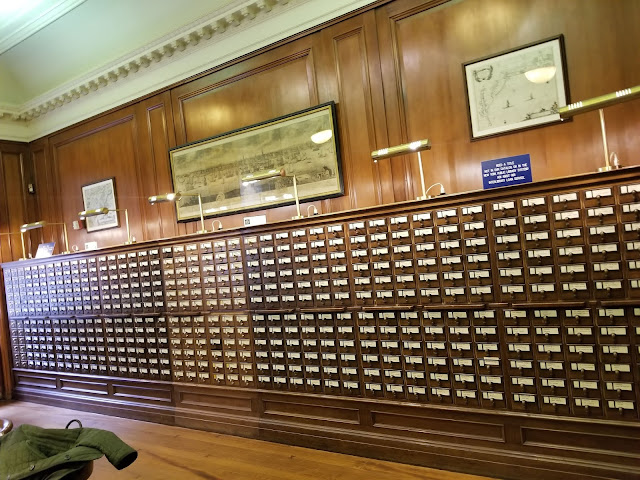 So I joined a subscription library today.
This means, basically speaking, that one pays a fee to belong to it.
It seems to be a really good fit for me in many ways,
has quiet places for one to study and work,
it's beautiful and it also has lots of DE Stevenson books, including at least 10
I don't own and I am just thrilled about that.
I felt like I was in a candy store with so many vintage novels that I have never read...
it was just a wonderful feeling! 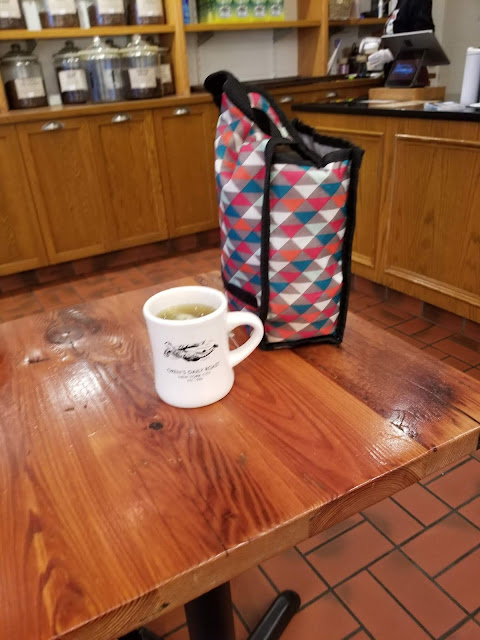 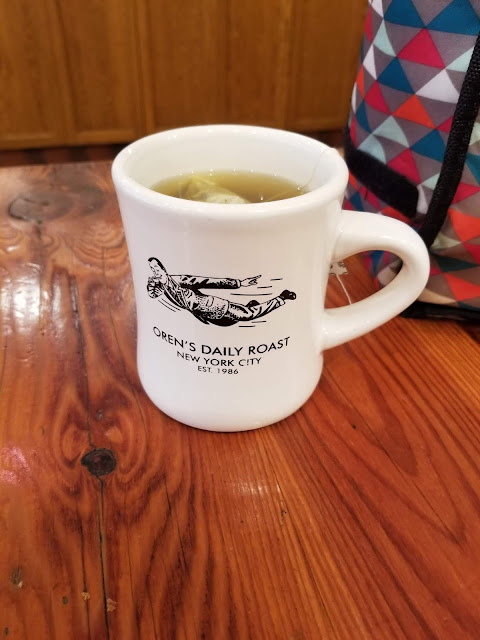 I ate lunch at a coffee shop, it had a nice ginger lemon tea :)
So I am hoping to visit that library at least once/week.
I checked out 2 DE Stevenson novels to read!
I am so pleased.
***
My dear cousin saw my Aunt in hospital today,
she was tired but OK.
I really appreciate your continued prayers for her.
***
I am really tired from today's being in NYC;
I had breakfast first with my Husband,
then the train had problems (Subway that is) and we were waiting for
a long time.... then I talked to this amazing Coptic Christian cab driver...
and then I was at the library ....
***
I have that research I mentioned above that I want to do,
plus other essays I am working on.
I also still want to bake for Pascha, and eventually get back
to working on my goddaughter's quilt,
so I don't lack in any way in things to do!
***
I pray that each of you are blessed and have the help
you need and the mercy, no matter what is happening,
that you know the Lord's mercy...His love, His promise to never leave us...
Posted by elizabeth at 10:59 pm

I love any library. Your looks a very beautiful place and full of exciting books. I'm sure you will find it enjoyable.

I had a great experience at the library today. I had requested a Miss Read book and the librarian said I could keep the book because they were culling older books and this was one of them!!
Would you say the Eliz. Fair book is at all along the style of Miss Read?

Elizabeth, yes, I love almost all libraries (there is at least one that made me shudder in terms of how poor it was and with service that well, was disappointing)...and the one I joined seems very nice... yes, I think I will enjoy it.

Granny M - I am so glad you got the Miss Read book but I admit I so sad that yet another library is discarding them :( ... the older books I find much desirable compared to ones of today ... The Elizabeth Fair book is very enjoyable but I would say it is different than Miss Read. Main character is 20 years old and it's in an English village but has a lot more to do with one family than a village and a lot of things not told to the 20 year told and she is often quite mystified... but I am enjoying it...

I've only heard of subscription libraries in Julie Klassen's English historical novels. It's really cool that they have so many old novels. Most libraries get rid of them! Granny M is very lucky to get that Miss Read book! :) Sounds like you have some interesting research ahead of you!

The research on perspectives on the Eucharist sounds like a fitting Lenten activity! I will be very interested to read whatever results from your research. You are wise to have some good lighter reading on hand as well :-)

It makes me so happy that subscription libraries still exist, and that people like you are using them and keeping them going. I was riveted to the shelf you pictured, with all the obviously older books, and wondered at it, because I don't think you could find a shelf looking like that at a public library, except in closed stacks, which I don't get to see. And then I read that it was a subscription library. That explains it!!

Christian homeschoolers have been saying for a long time that we must be sure to maintain our own private libraries for the sake of not losing the heritage of Christian civilization. We can't count on the public libraries and their librarians to know what is of lasting value.

G-J: yes, and I can only hope that this subscription library does not weed these lovely novels one day!!! They have sadly not updated the beautiful card catalouge since 1990. I totally agree about private libraries and trying not to lose our Christian civilization. Sadly you are very right about librarians in general not knowing what is of lasting value.