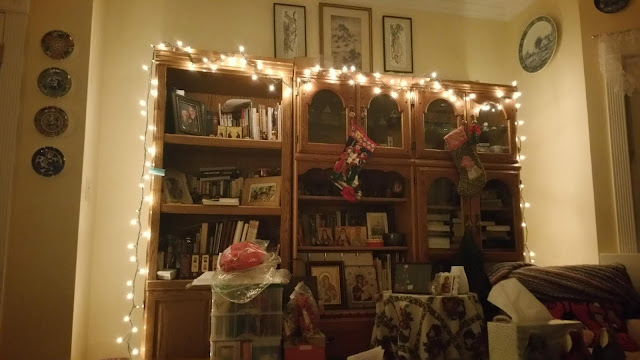 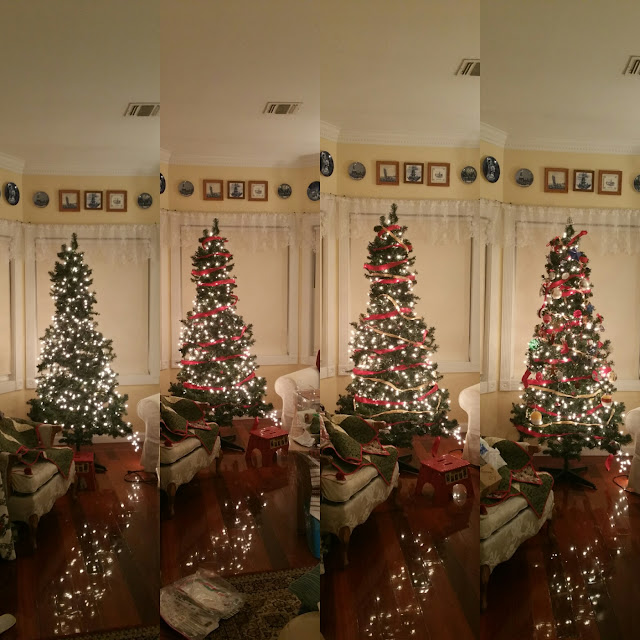 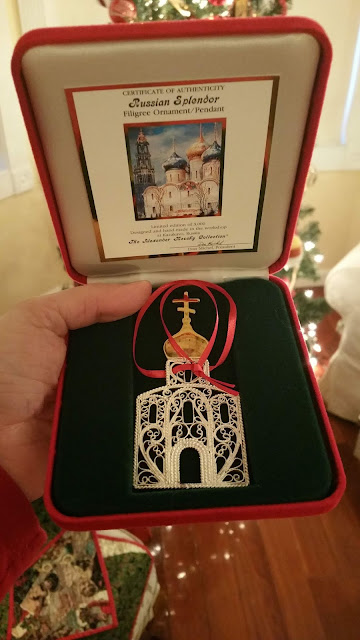 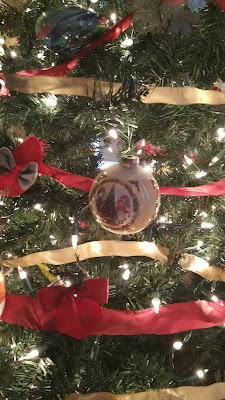 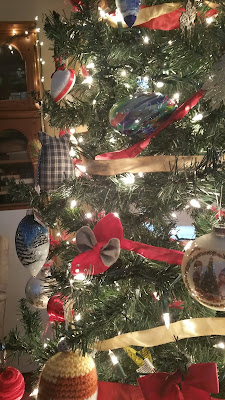 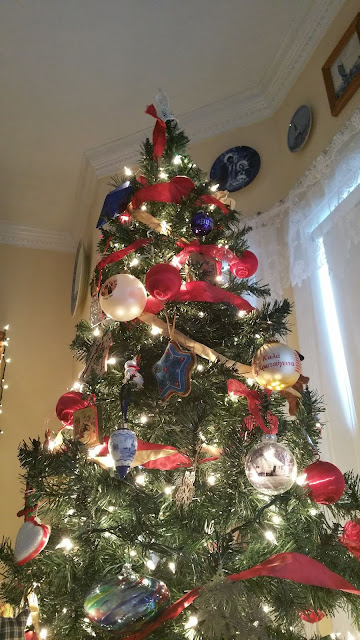 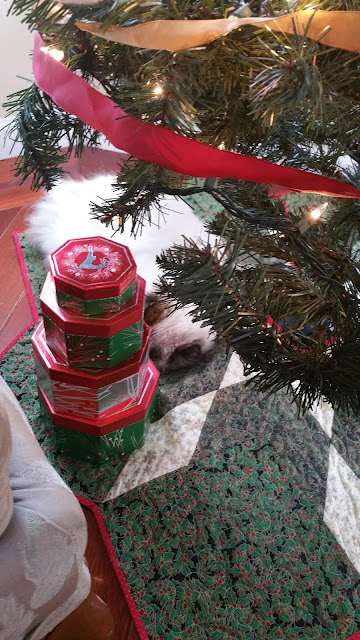 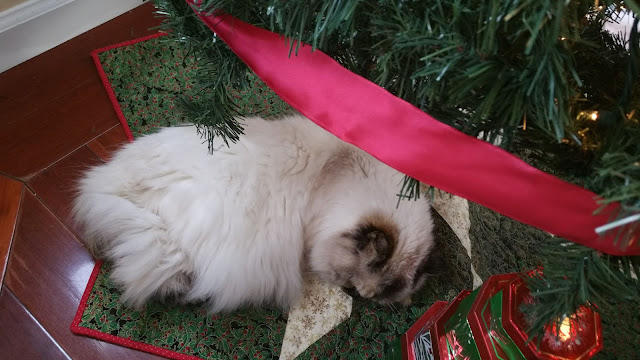 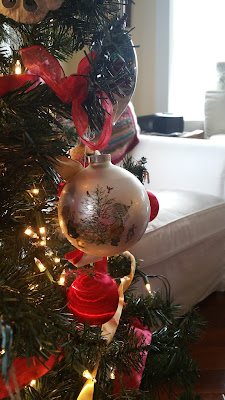 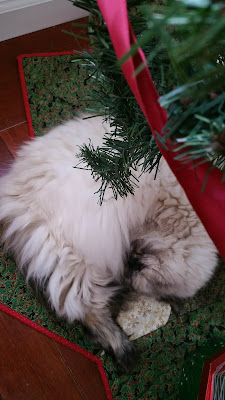 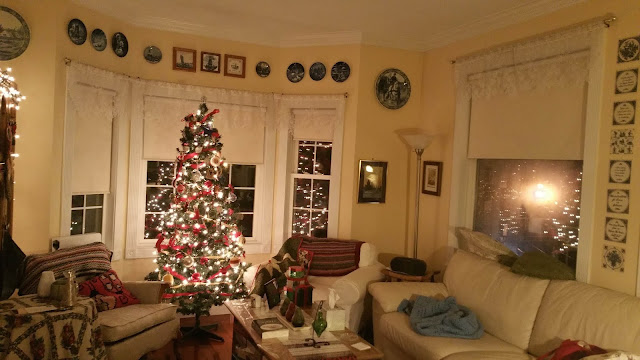 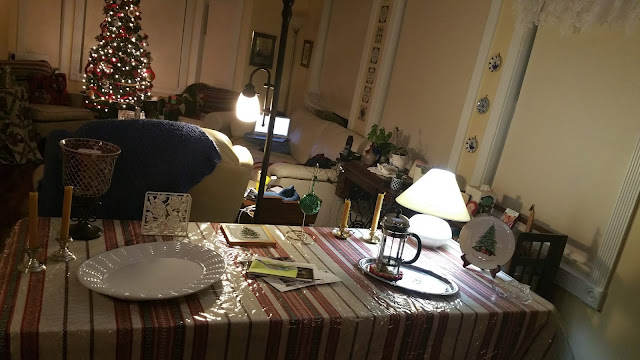 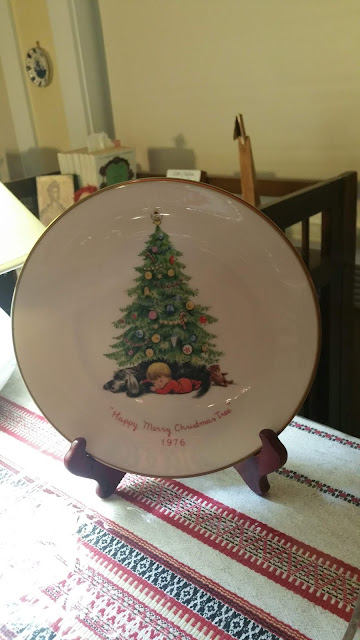 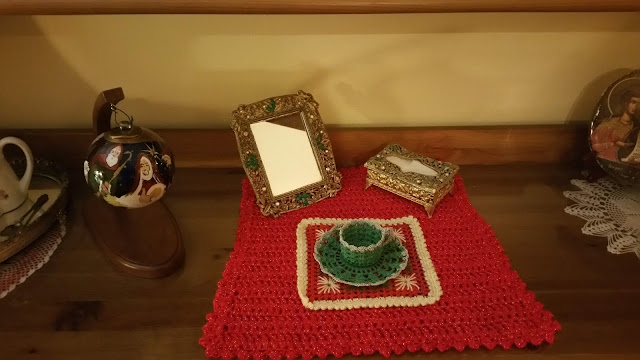 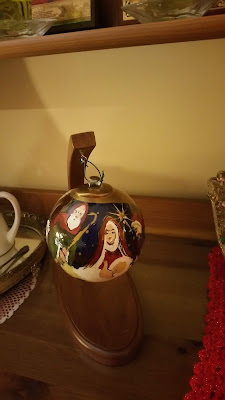 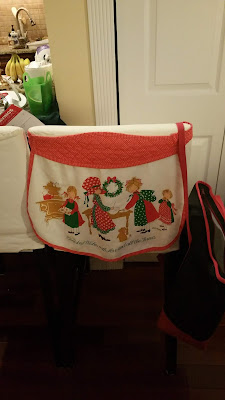 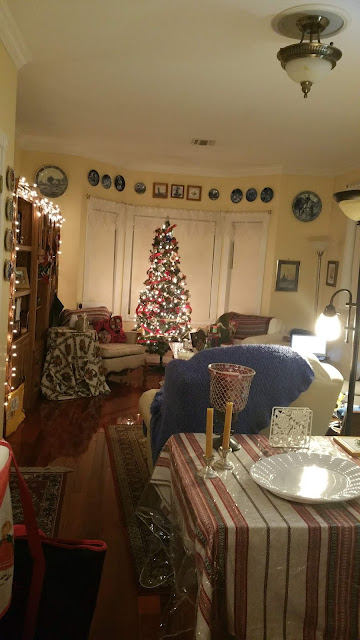 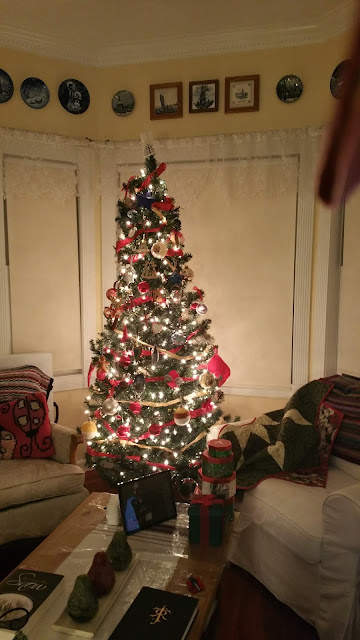 I had a touch of insomnia in early morning
and so my tree got decorated and fully trimmed between 5 and 8 in the morning.
I love doing my tree, seeing all my decorations again and
remembering the kindness of so many.
I am missing at least one though, a beautiful golden ball that was handmade
by a librarian in Ottawa and given out to us all at a meeting.
Well, hopefully it will be found again, someday, by me in some box
that was put wrongly away from all else.
I had a long nap later in the morning. Boy I needed that nap!
I managed to make lunch for us and we enjoyed the cookies I baked
yesterday, my Husband I am happy to say, had 4 while I had 2.
They are quite delicious! I bought more cranberries tonight to use DV
for more of these later!
If you look at the progression of these pictures, you will see Cleo the Cat,
The Cutest Cat once of all of Canada,
comfortably asleep on the Christmas Tree Skirt.
Then later you will see that same Tree Skirt on the armchair and the cute
decorative boxes on the coffee table.
Well. Cleo probably at a stray fake pine needle that I failed to clean up
and she nearly got sick on the Tree Skirt which I whisked from under her
right before the damage would have been done.
Poor Cleo. :)
She's fine however, begging as normal, eating dry cat food as I type these
lines and looking as cute as ever.
I tell her every year that if she even thinks about harming my Tree
that she will come to no good end herself.
So far so good ;)
***
So one of my IRL (in real life) friends wrote me asking where that quote was from that
I had put up on my blog.
I put it again below so you know what I am talking about. 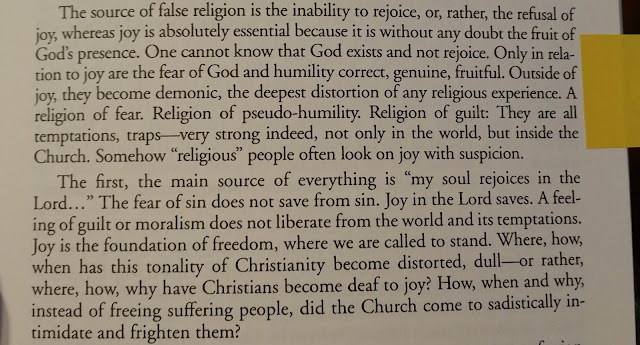 The above paragraphs are from
The Journals of Father Alexander Schmemann, 1973-1983
Fr. Schmemann talks a LOT about JOY.
Also he talks about, at least in year 1976, the changes in the Anglican Church
and the decision to allow women into the priesthood.
I had no idea, to be honest, that this happened so long ago, when I was yet,
literally, in my Mother's womb, to be born a few months later.
I am thinking about this a lot... I had about ten years of my life
(age 17/18-26/27) where feminism perplexed, beguiled, enlivened, confused
and left me haunted with questions of what it means to be a woman,
what it means to be a man, what gender means, what is nurture, what is nature,
what does everything before and after 1968 mean.
I keep thinking it would be nice to write some essays on that.
Short version though is that Kathleen Norris' books helped me out of this
quandary of perplexity and a bit of the Church Fathers that I discovered
when researching Milton's Eve showed me very quickly that a lot of
what I read about the past and esp the Church Fathers was wrong,
that feminist theory that I was reading lied to me,
simply and baldly put.
***
Well.
This week I am thinking a lot about the St Nicholas lunch I am hosting
and how to have it go smoothly.
I am excited about it.
***
I have begun reading again the biography of Elizabeth Goudge
Beyond the Snow.
It's lovely.
***
I fell asleep thinking about how wonderful it is to think
of God as father and that the traditional view of man and women,
the goodness of it, the way it really was to be,
deep fatherhood, deep motherhood,
still is.
I find this world deeply alienated from what really comforts, sustains and
gives life. Including in this.
But to just remember that while the world is full of confusion,
noise, pain and more noise,
with God there is no confusion, and that a deep loving Father and a deep loving
Mother is a real and abiding reality
and that it is not lost, not lost in God, not ultimately lost in people,
as everyone still has the seed, the image of God, in them.
***
Well, on that more reflective note, I better end as it is late
and sleep is needed.
Posted by elizabeth at 11:24 pm

Lovely. Your home is glowing with invitation. Cleo wants in on it, doesn't she.?

So pretty. I love it when kitties love being under the tree. I am visiting from Pom Pom.Your home is lovely. I love Elisabeth Goudge too,

Your tree is lovely, Elizabeth. Glad that Cleo didn't get choked or sick.

Everything looks so lovely. We're likely getting our tree this week. I have to shift around Ella's book case to make space. What is it with kitties and sleeping under the tree. Tim goes under the tree from the moment it stands up in the living room. Even while it's still dripping melted snow. Oh well, so long as he doesn't climb it he's welcome to sleep where he wishes.

I'm so glad Cleo didn't throw up on your tree skirt! Otherwise, they do love sleeping under the tree, don't they? I haven't yet read Beyond the Snow, but I think we have it at the library.

Your tree and all the decorations are sooo BEAUTIFUL, Elizabeth! And how sweet you had a little "helper" with Cleo. ;) Nothing cuter than the sight of a kitty curled up under the Christmas tree... *sigh* ...((HUGS))