I listened to this many times this morning, before
going into NYC for my third eye test.
It's beautiful.
I first heard it when we were sharing music at the Bright Monday
dinner I was at; so moving, beauty, it WILL save the world... 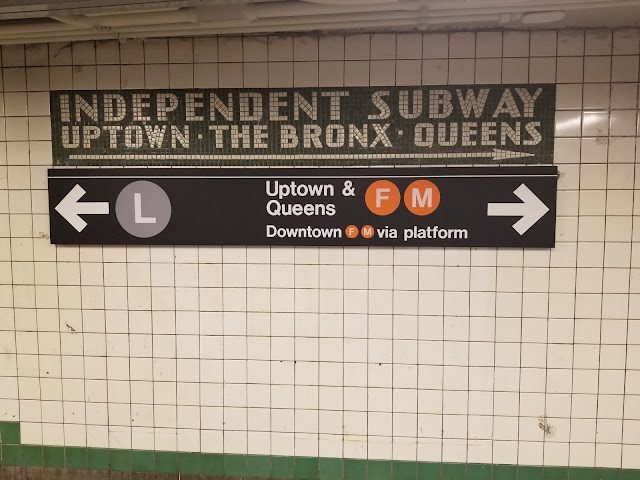 I am back from NYC now.  I wrote the following on social media and am
sharing here as well. 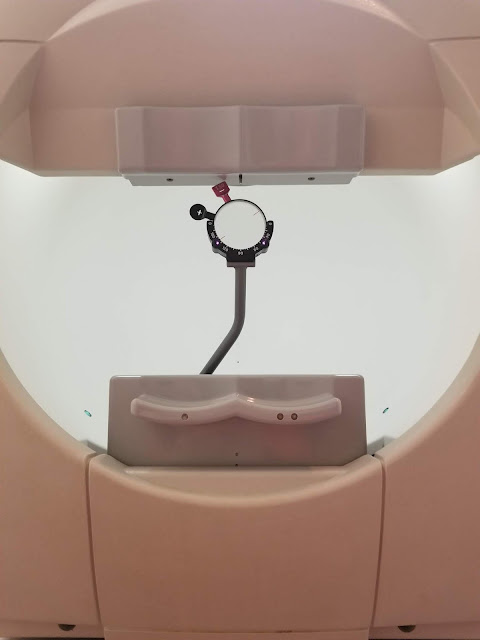 (Picture of machine for the eye test I had)

Today I had the third of 4 vision / eye function tests. I don't think I did it exactly right but have no idea how much it was off. I did get the print out, which I looked at after talking briefly to my Mom via phone at a diner in NYC (had pasta with clams, really good!) ... what I did not know is that the print out included the request from my retina specialist to the reason for the tests. He is trying to rule out something that is benign in itself but could be that which comes before a more serious eye problem. I am doing my best to not worry as at this point I have not completed all tests, I have not spoken to my retina specialist and my reading of what he is trying to rule out is something that MAY lead to a serious problem not necessarily proof of it coming later on. I am not stunned by this in part because my retina specialist told me enough to have me understand that he has a concern that my severe myopia may lead to a loss of (some/significant) vision function later on. So it's is sobering but I just keep thinking of God and how I want HIS will for myself *no matter what* because His ideas and plans for me are so much better than what I, in my limited understanding and still being a sinner, could ever plan for myself. One of the authors I love so much is Elizabeth Goudge and in one of her books she has a ship captain who refuses to abandon ship when his ship is clearly sinking. I can't remember but he may have been tied to the mast so he could not abandon ship. And as he was dying in the storm, his ship sinking, the last he knew was the great deep LOVE of God. For me no matter what, I would rather be tied to the mast of God's will even if, on this side of earth, it means sorrow and suffering. Also, it seems that everyone goes through sorrow and who would not want God's love to be with them in it than otherwise? Of course I need prayers about this and it's not easy. But my biggest prayer remains not that I am healed of eye problems (etc) but that when I die, I die as a Christian, as one who has not denied Him, as one who God, in His abounding mercy, welcomes home to be with Him forever. 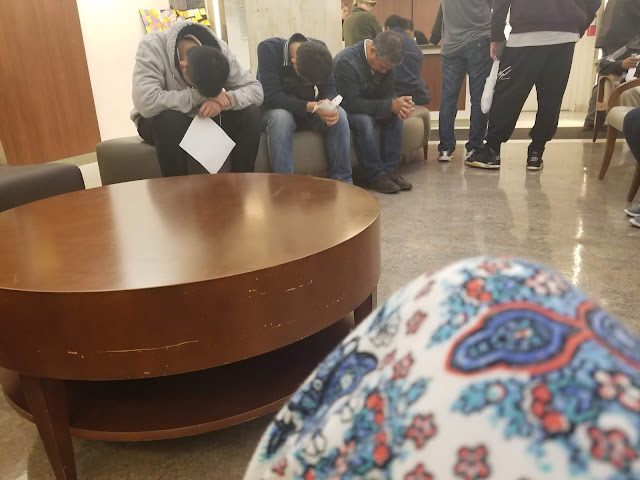 I also saw some encouraging things today in NYC. First, in one a room I was put in to wait to be registered, I saw these 3 men, praying. I have no idea who they were praying for / about but it was moving to see. And yes, I took a picture... since it has no identifying features that I can see of who these 3 prayerful ones are. (I hope they would not mind, it was like being reminded of God's presence and God's people in the world and in difficult places, a real blessing to see).... 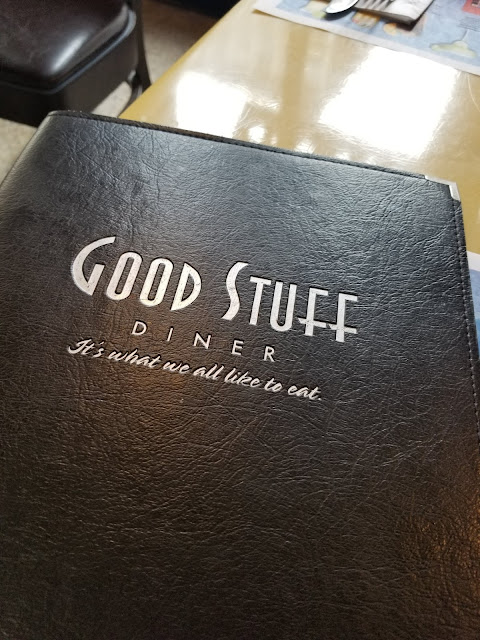 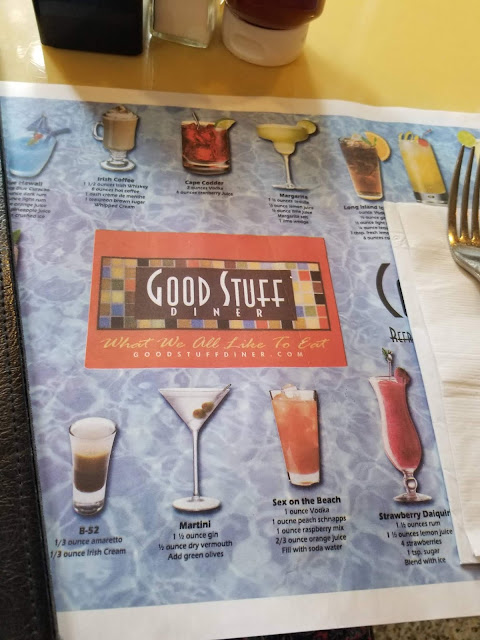 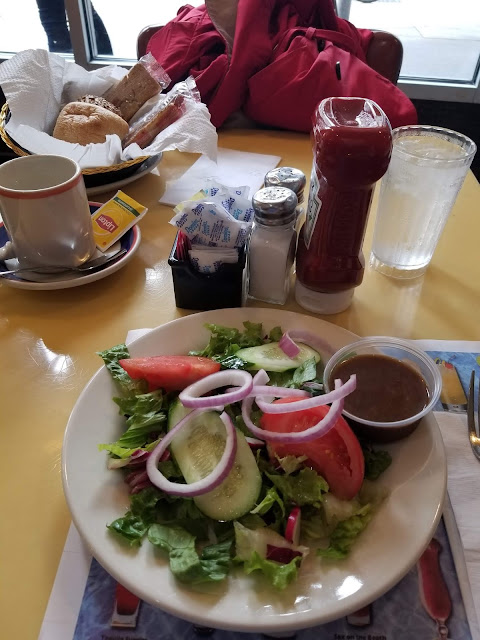 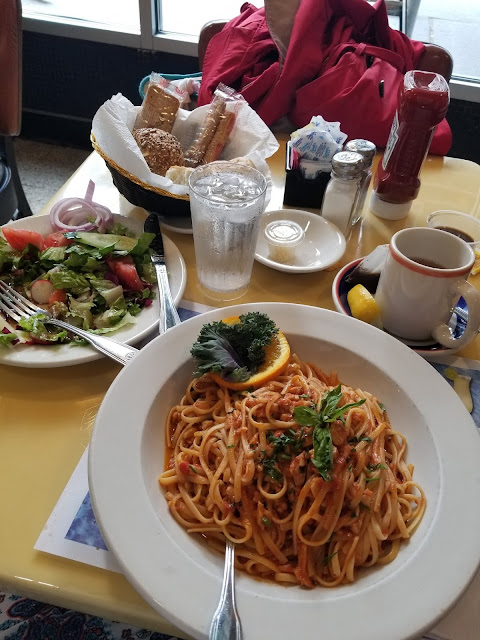 The other encouraging thing I saw was at the diner. First there was a woman there, by herself, she was sitting at a table for 2 and the other chair was gone so her walker could be at the table across from her. They were very patient with her, getting her change and doing the bill at the table. She moved slowly, had a tattered skirt, stained, not all buttons buttoned. (She had some sort of pants under her skirt). Her face was one that looked cultured but worn down by age. When she left, walking slowly with her walker, the cleaners quickly cleaned up everything, not at all being upset to see no tip (she did have a expensive meal and ice cream; she was asked when I was just getting there if she wanted ice cream; I think she is a regular who they know what she wants to eat) ... within minutes I see the manager quickly taking silverware, leaving the napkin and moving the chair (that had been put back) away quickly. And a more well dressed older woman with a dark houndstooth skirt and a walker came in, put her walker where the chair was and sat down, menu already waiting for her. There was such kindness in the the actions and in the greeting of this woman, all so quickly done. It was really beautiful to see.

The little courtesies we show one another are so important. I liked the story of the staff in the restaurant very much. You've had to expend so much energy in the testing for your eyes -- I'm glad there's only one more left. Then, perhaps, you can feel more confident about the way forward.

Your story of the women with walkers was so nice. It's good to know such kindness still exists in the world. I like the diner's motto: It's what we all like to eat. :)
I agree with you so strongly in your attitude about the results of your eye tests. Clinging to God no matter what, and wanting His will above our own is the only way to have victory over the hardships that would otherwise overwhelm us. Prayers are going up for you, sister in the faith! :)

Very moving to see the men praying. And the music was so beautiful! I'm praying about your eyes, Elizabeth. :)

Your faith is so strong and your determination to be in God's will is wonderful to behold. I'm glad you saw kindness and people praying in a public place. So great.
Also wanted to say I was blessed listening to Stabat Mater by Jerycho and will go to youtube to listen to more of their music.

Sara at Come Away With Me said...

Thank you for sharing all these experiences from your day. It's wonderful how you tied that EG story to your own thoughts and issues, and I agree wholeheartedly! I love the music too, though I've long ago forgotten my high school Latin, and am unfamiliar with the song/poem, but easily found a translation which link I share here for any who are interested: https://www.stabatmater.info/english-translation/

I have had that same eye test many times myself; it is easy to get flustered during it and to feel as if one has done it wrong. Please rest assured that the doctors take that into account when reading the results and that is also why this one test isn't the stand-alone for diagnosing serious eye issues. My prayers are with you on this journey; I know first hand what it is like to wonder about a diagnosis and then receive one that puts vision loss not as a possibility but as a fact. Thankfully my own vision loss is being held at bay (by God's grace!), but there will come a point when the treatment being used won't work. Grace and peace to you; hold tight to Jesus!

Dear Elizabeth, how sweet that God gave you eyes to see the goodness of the human spirit around you, even on such a trying day. Your courage is admirable. We know almost nothing of how God works and His reasons for allowing different trials for different people, but I'm glad for all the stories showing us that He DOES do wondrous things all the time.

Such a beautiful post. And so many lovely comments. I don't have anything to add, really, but I want you to know I was here and appreciate what you shared. Looking forward (with you) to your final test being done. Praying that you stay strong in faith, Elizabeth.

Elizabeth, it is always a blessing to see kindness in the everyday. I will continue praying for your eyes.

** You are the winner of my giveaway! Congratulations! xo

Hello Elizabeth, In a world where so many focus on all that is wrong in the world it's always wonderful to be able to witness kindness and goodness in the hearts of others. Praying that you will continue to experience God's grace and presence as you go through all your tests and that you can rest in the trust you have that God is holding you in the palm of his hand.