Last evening
Mr. Husband and I realized that we were in
for some more snow. 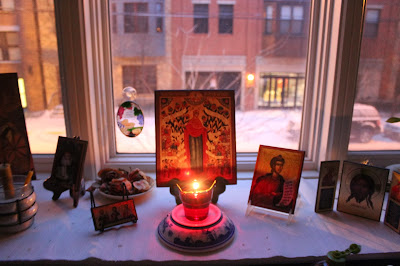 I woke to it's beauty. 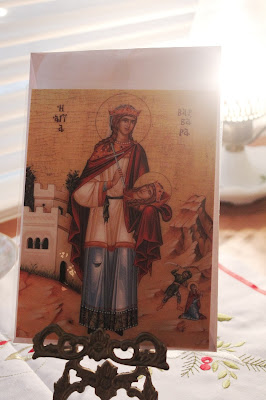 I had originally hoped to be out doing errands today
on St. Barbara's Day.
Instead it is a quiet day, one that found me
getting some much needed rest. 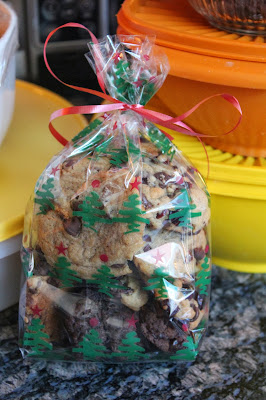 Here's the first bag of cookies that I gave away.
Cute as all get out.
Somehow I have become that woman who wants
everything to be very lovely, somewhat cute and
as always, good to eat, a delight.
*
So far the forecast seems OK for going to St. Nicholas Day liturgy.
I have hopes of bagging many more cookie bags to give out
that day; St. Nicholas has long been my favourite
and this year God has granted me the energy to
bake for this day.
I am grateful.
*
I've had at least three requests this week for the recipes I used.
I don't have time to type them out but took pictures of them,
see below...
they are from the same cookbook that I used for the
chocolate brownie cookies,
is from this cookbook:
Food For Paradise: A Meatless Cookbook.  St. John the Russian Church, Ipswich, Mass.
*
I was given this cookbook as a wedding gift.
FYI, I also know where to get a copy if you need by,
just email me.
*
So here are the two recipes: 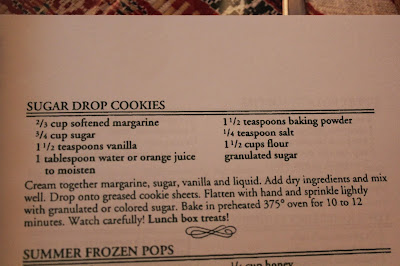 The one above I used as is. 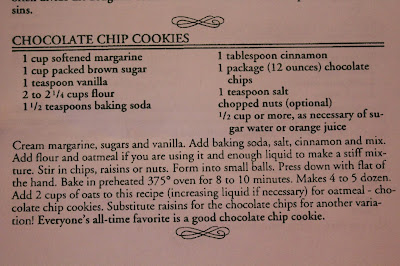 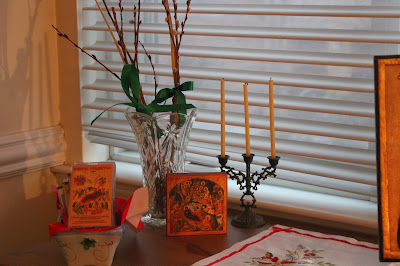 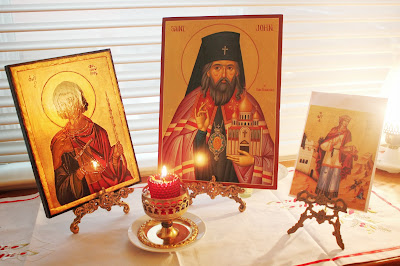 Tonight for St. Barbara's Day
I hope to make shrimp,
share a soup with Mr. Husband that I made last night
and share a cookie or two.
*
Blessed evening to you all!
And Happy St. Barbara's Day!
Posted by elizabeth at 5:14 pm

And Happy St. Barbara's Day to you!!!

It was my mom's namesday! ♥ I have that same cookbook...I've probably made both those recipes before, but I really like your addition of dried cranberries to the chocolate chip ones...my sister often adds dried cherries to them!!! I need to make some of those this week to bring to my in-laws house when we celebrate Christmas with them on Dec. 25th, since it's still advent for us who celebrate on Jan. 7th.