Before you hear about the details
does anyone know how to fix a broken Pascha egg?
I had to soak it in water and vinegar and
am hoping it will dry well and
I can glue it back together.
I am thinking of using glue used for China dishes
does this sound like a good plan?
\ 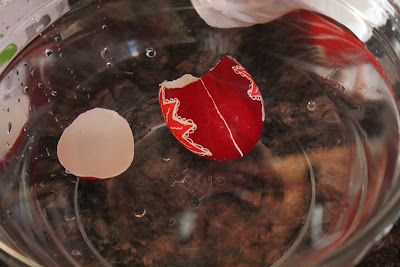 So I had this egg on my table
by the Pascha icon.
As can be seen in this post.
So it kind of was never done properly and
there was still real raw egg inside,
a few years old.
Well not any longer!
(I know that is the ewwwwwwwwwwwwww part)
I accidently knocked the icon over,
which knocked the egg cup over,
which then the egg broke
and suddenly there was egg everywhere;
ironically I was just trying to move a cloth that was under it
as I was worried it would get spilled on.
Boy did it ever.
So Mr. Husband has a long abiding revulsion of eggs
and he tried to clean it up without thinking about it
and then I had an almost very sick husband who
I quickly shooed out of the kitchen.
I cleaned it all up and
put the broken egg shells in water and vinegar. 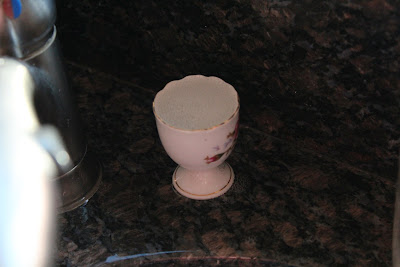 Soaked the egg cup
and put the cloth in water.
While I was cleaning up the table from all of this,
(we were about to eat some left overs that I had
microwaved)
I heard glass break
that I had microwaved food in. 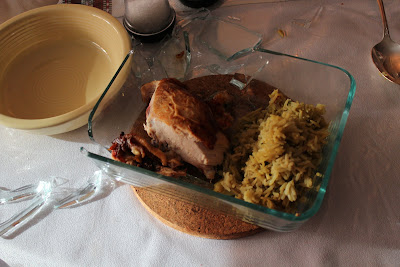 And I am always so careful about glass!
And I was careful this time also!
I NEVER put it from freezer to microwave, etc.,
having heard the story about the time when my Mom was young
and a glass bread pan shattered by the oven.
So then I had to throw away the
Pyrex glass container and food;
cleaned up lots of glass shards on the table, the floor;
cut my thumb on a tiny glass shard
and we threw our whole dinner away,
not just that food but sadly a newly gotten out
frozen loaf of my Grandma's Christmas bread that we had
kept special in the freezer,
beef roast, potatoes,
got new dishes out etc as the glass shards were scattered and small
and we did not want to damage ourselves by swallowing glass.
Note, I had already punctured my thumb on an invisible
glass shard.
We replaced Cleo's food and water (near on the ground where the glass broke)
while Mr. Husband
talked about the Brother's Karamazov
and the boy who almost killed a dog
by having the dog eat broken glass;
and got everything
in the dishwasher for a good clean.
*
We ate a short meal,
Mr. Husband still feeling unwell and I having lost my appetite
through the smell of Lysol...
*
Mr. Husband and I admitted to ourselves that it was
stressful to suddenly have a broken Pascha egg,
(done by a woman's sister who was ill in hospital and who
failed to drain the egg as one is to do)
and Mr. Husband being sick
and the glass shattering on the table.
*
Mr. Husband was sad for me as
the Pascha egg was given to me on Pascha by one of my
favourite people at my parish a few
years ago and is the only tangible thing I was given by
this person....
*
The redeemable thing of it was that
while Mr. Husband put all the dishes in the dishwasher,
I read more of Every Day Saints out loud.
And just to think,
I had wanted to make
a roasted chicken like we had on Thanksgiving
but was worried about it taking too long
since I am still trying to pace myself
so that I do not relapse with the mono...
*
Tomorrow I hope to make the chicken
and I hope the egg shell will dry and be able to be fixed;
I know it may not be fixable
but it was from a dear church member on Pascha
and I had really liked it....
*
Some days are just like that,
as the book
Alexander and the Terrible, Horrible, No Good, Very Bad Day
narrates.
*
I did try to console Mr. Husband by telling him
about my reading in this book of Madeleine L'Engle's Mother
witnessing as a child
the whole town burning down in one day
and everyone losing everything.
A lost egg, a lost meal and a lost dish
is nothing really
but the suddenness of the events did leave us slightly breathless.
Posted by elizabeth at 8:57 pm

Email ThisBlogThis!Share to TwitterShare to FacebookShare to Pinterest
Labels: whew that was crazy and unexpected

Nevertheless, what an evening, so vividly described here! Quite touching. Alas, no suggestions on how to repair the Pascha egg.

Oh no, oh yuck! I'm sorry you had such a tumultuous evening! Some of those beautiful traditional eggs are made without blowing the inside out at all - eventually, since eggshells are air-permeable, it just dries out. But those years in between... Such things happen and the important thing is how we recover from them. It sounds as though you and Mr Husband took your opportunity to show love and kindness and patience to each other! I wonder if you could stick the broken egg pieces onto the right size plastic or wooden one for support. Best wishes for a peaceful and smash-free Bright Thursday!

My word, what a catalogue of mishaps all in a short period. No suggestions about the egg, I'm afraid.....

It seems that various disturbing things happen during Bright Week - maybe it is just so that we have to pay attention to the Paschal grace and not lose it through things being *too* easy and light.
Anna has a good point - you and your husband are using your opportunity for showing kindness. God bless you, and keep your other eggs safe. :-)