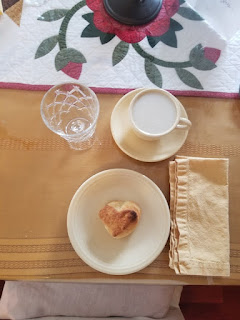 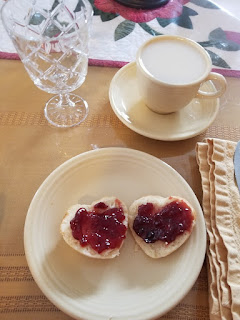 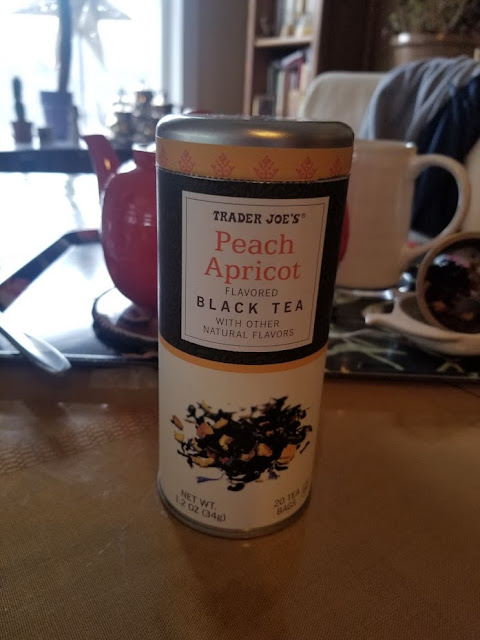 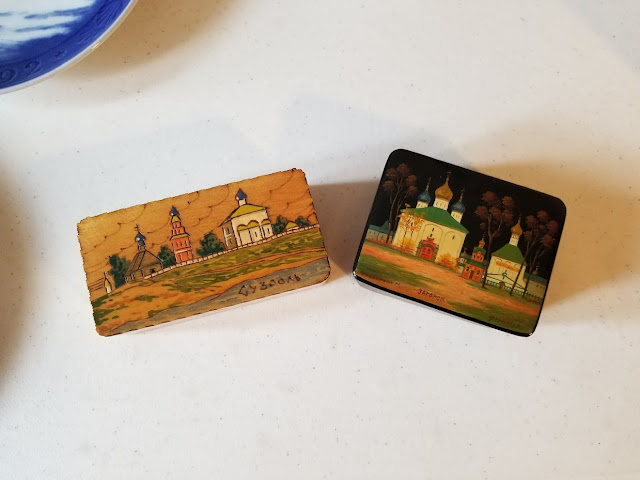 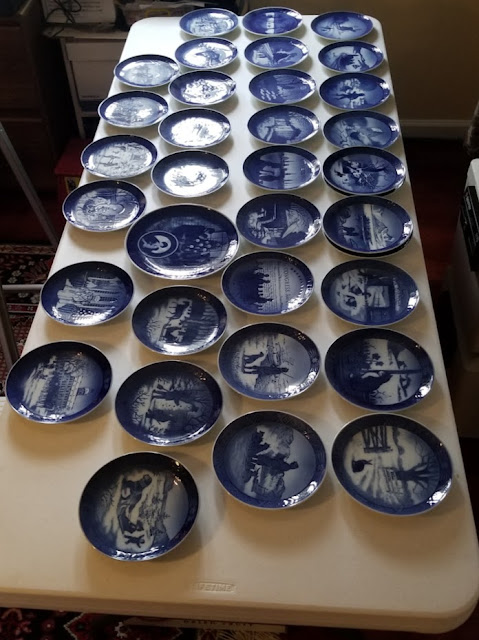 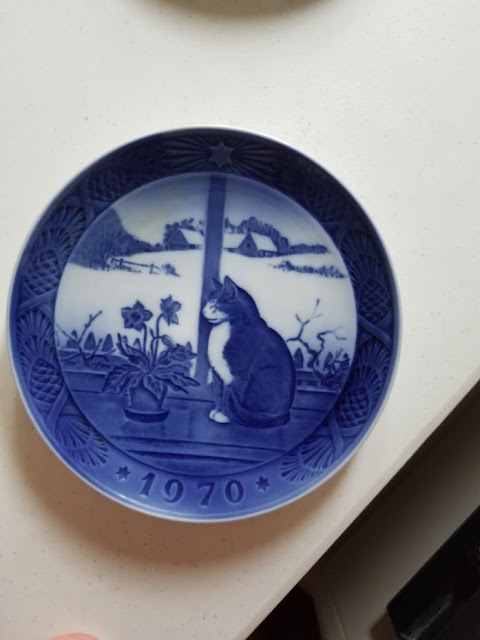 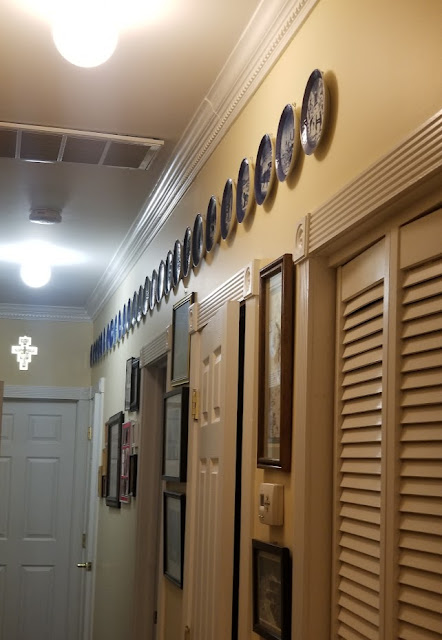 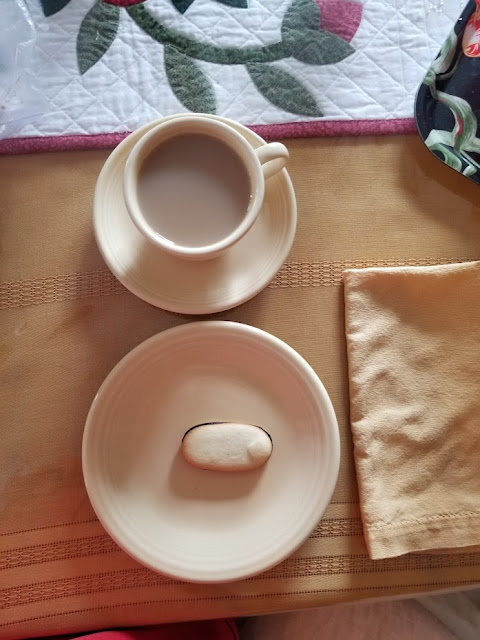 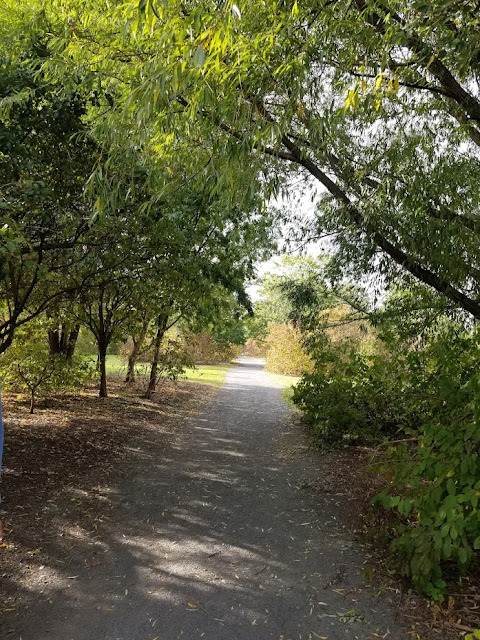 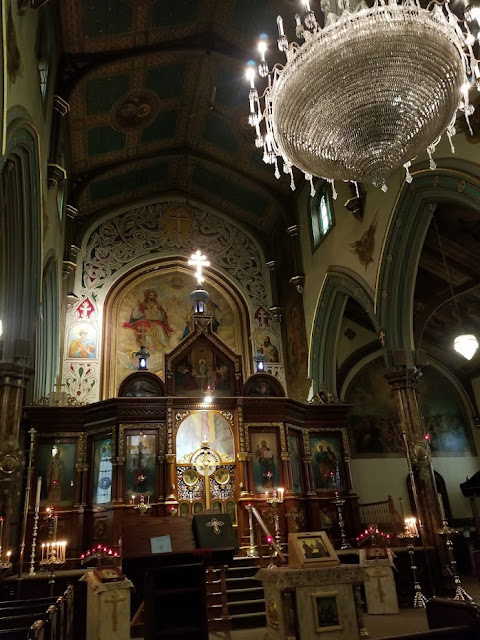 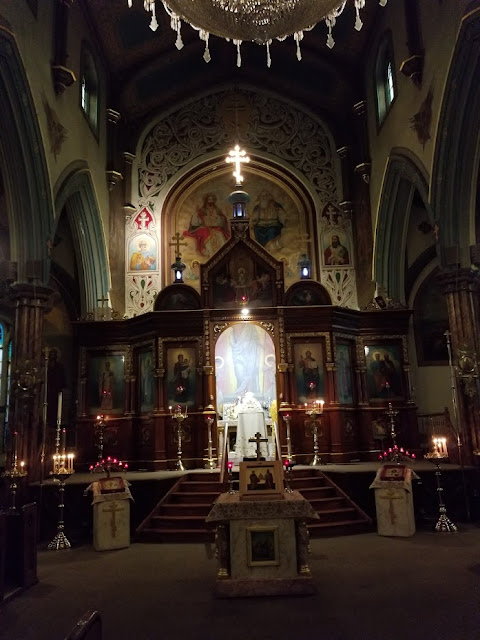 In 2018, when I had my biggest Thanksgiving meal to date, see HERE and HERE, Larissa came over for Thanksgiving.  I gave her a tour of our home, and when she was standing near the bay window (where our Christmas tree is during Christmas), she looked at our blue and white plates and said, "now I know who to give my Royal Copenhagan Christmas plates" and so it was, less than 4 years by 1 month, that we were given Larissa's plates.  1963-1992.  With 3 extra plates + 2 doubles.  My Husband spent the afternoon putting up most of them.  He has about 4 or so to go.  A real labour of love.  I knew Larissa had a lot of them and I used to wonder where I would put them, for I believed her when she said that.  Of course I had no idea that it would be so SOON after.  No, I thought she would have more time.  I think she did too.  But she did understand that she was in her last years.  It's a huge memorial to her, really, all those plates.  It says so much to me.  Her life, which I know so little of, but what I know makes me love her more.  Her dreams, her heartache, her life of hardwork, her intelligence, her home that she put together so carefully.  That was something I really saw when we helped with +Patrick's home.  So carefully decorated but one day, one dies and it is all dismantled.  So it will be with us too.  I know this.  I already think, who will I have to give things to? Time will tell.
I love that Larissa loved the church so much.  She really knew what it was about, what living as an Orthodox Christian meant (like going to the church feast of one's church and taking the day off work etc).  I remember how happy she was when she talked to the priest of her late Father's parish (he died in 1978) and she heard of many who she had not seen in years, she was so happy.  I realized how much that church and the life she had there meant to her.  How moving closer to NYC and away from this church was a real change in her life.  I don't know if she ever had the same sense of community again.
I was looking over my blog, remembering how she fell and broke her hip, how I and Photini visited her when she was just out of the OR (HERE) and a day or so later I visited her in the hospital (HERE) or that late she got pnumonia (HERE) and I was so worried.  Later the panedmic started, she was still in rehab and I got her a bunch of books right when lockdown was about to start (HERE) before that I had visited and brought her Russian blini which she just LOVED... I am glad I brought her some joy... and some happy memories of when she would have had this in years past... (HERE)...
This life, we are just passing through, but who we meet really can bless, impact and change our lives.  I know that she was always so kind, eager to hear about my life, fully understood how hard it was to lose my Cleo Cat (She had gone through that too) and I am so glad I knew her and that in Christ no matter where or what demension, we are together. I really feel that not only was I meant to marry my Husband, that we would be a support to each other for these middle years of our lives, but that I was sent to ones like Larissa as well.
And somehow she, too, was sent for me.  Her icons, her Psalter and other prayers, are deep deep gifts for me. 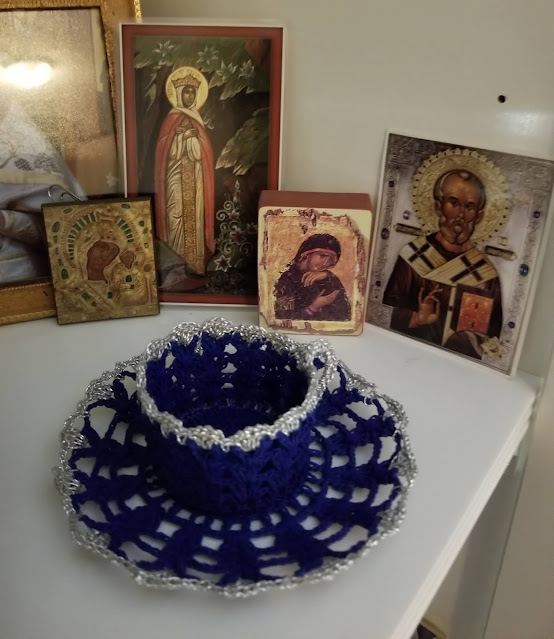 Larissa's Mom, Mat. Tatiana, made the above teacup and saucer! It's crocheted and then starched!  I love it very much.  It joins my collection of treasures from my family and friends... 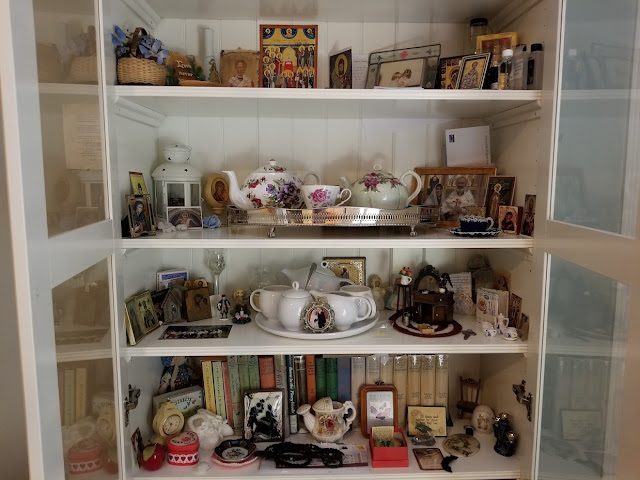 Speaking of the word starched... my Grandma fell a week ago, she is fine THANK GOD, no broken bones.  But she landed on the side of her face, her glasses got thrown off and bent (they are fixed and she is getting new ones) and she told me yesterday that the fall 'took the starch our of her' which I realized was the perfect expression for how she felt and that she needed a lot of rest.  A fall like that and at her age (91) is quite a big deal.  Thank God my Mom and Dad were there to help her get up (she said she would not of known what to do) and my Dad made sure she was fully OK before they left her (and they saw her the next day too).
I think with losing Larissa, I see how my Grandma, her sister and others, we have limited time with them.  I hope for more years with my Grandma, we are quite close.  But still, 91 is 91.
Larissa was only in her early 80s.
I feel like the prayers for the departed that she had with her Psalter are so deep, profound, so Christian, as they are all prayers to Christ.  (If you wanted to read it, see HERE).
(my friend translated info about where it is from, these prayers, he wrote me:
According to many sources, the akathist for the repose the departed belongs to the pen of Hegumen Ippolit (Jakovlev, +1937) the last father confessor of the Moscow Theological Academy and Seminary….” “before the closure of the Trinity-Sergius Lavra in 1917”)
It is such a profound bunch of prayers. Well, I better get to bed.  It is time.
God bless you, keep you, console you, help you in all things...
Posted by elizabeth at 11:15 pm

That's quite a row of blue plates which Larissa so kindly wanted you to have. Your husband did a good job of hanging them above the various doorways.
I'm so glad your Grandma is okay after her fall. It's a wonder she didn't break any bones. Have a blessed Sunday.

Those plates are truly beautiful Elizabeth. Such a wonderful and heartfelt gift from a dear friend. May the Lord be merciful to your beloved grandmother and give you both time to make many more memories together. I just received the news that my brother-in-law who had suffered a long time, has finished his race in this world and the Lord took him home this afternoon. "Oh Lord of unutterable love, Remember thy servants who have fallen asleep."

What a sweet and beautiful gift those plates were to you. I love reading how and when Larissa decided to give them to you. I'm sorry you've lost such a dear older friend. I'm glad she left you something so special. And they look beautiful hung on the wall there. Also glad to read that your grandmother is fine after her fall! It is no small thing to take a fall at that age.