Book Review (Story) of 'Will the Circle Be Unbroken:A Memoir of Learning to Believe You're Gonna Be Okay.' 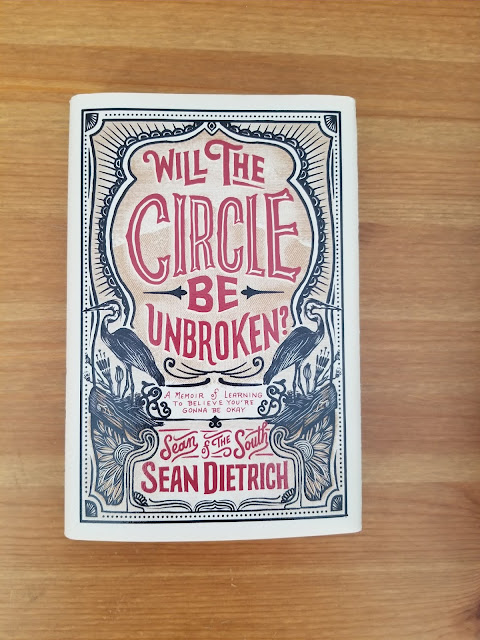 The summer of 2020 was hard.  I had thought we were visiting home (Michigan) and then COVID numbers in Michigan soared.   The grief was overpowering, along with loneliness and fear.  In the midst of this, a friend put a post on Facebook that I clicked on and read.  Soothed for the first time in months, I kept reading.  It was a blog by some guy named Sean of the South.  I’d never heard of him.  Before I knew it, I had subscribed to his blog. Everyday I checked in to read his latest blog post.  Sean Dietrich’s words captured so much.  Often I would be just waiting to read it, as if I was in a desert where no water is. Every day, I still read his blog.  Later, I began following Sean’s instagram page (@seanofthesouth), then his wife Jamie’s (@jamiemdietrich).  I really like Jamie; she loves to cook and bake. Then I realized that Sean had a new novel coming out. While doing dishes, I listened to a podcast by @shawnsmucker interviewing Sean about his new novel.  I wanted to read Sean’s memoir before his novel came out.  After finding his memoir online and reading the book blurb, I realized Sean had gone through nearly unspeakable trauma.  He did not just lose his father to suicide; he nearly lost his mother to murder.

Now Sean, if you have read his blog, writes about happy things. Sean sees normal people and realizes their personal victories. He calls nursing homes and talks to people who survived an awful lot.  He has kids writing to him with their anguish. He has adults who do the same. And he writes to them, to all of us, about the pain of our lives but also the hope.  If Sean can do this daily on his blog and he went through that as a kid and his memoir is about: “Learning to Believe You're Gonna Be Okay”! Well, that I needed to read.  So I ordered it, then and there!  It came Friday.  Because I am a wife, am responsible for meals and need sleep, I did not finish the book until Saturday.  If I had been single, I would have lived on cereal and milk until I finished the book.  Surely I would have swallowed it whole, needing only one day.

Instead, I was laughing for over 5 minutes, maybe 10, because of a funny story Sean told about his Uncle.  My Husband asked me, “what are you laughing so much about?”  I began reading it outloud to my Husband. Soon my Husband began quoting Sean: “we did not make good time that day.”  By Saturday morning I was getting an impromptu lesson on negative exponents and fractions because I began reading aloud Sean’s chapter on his wife teaching him math.  After breakfast I was standing by the kitchen sink reading out loud about his wife Jamie and how “Sleep Jamie” is not one to meet in a dark alley.  I asked my Husband if he emphasized with Sean, who narrates needing to figure out how to live with four different incarnations of his wife.  My Husband’s answer: a short laugh before saying “that’s for sure!”  By lunch I was reading aloud the entire chapter on how Sean met his wife who immediately asked him for tea in the church fellowship hall.

I called my Mom while I finished laundry and told her about Sean’s book.  Before I knew it, it was Saturday early evening.  So we went to church for vespers and got takeout afterwards for dinner.  Dinner done, with my Husband still quoting Sean, I went back to reading.  And I saw how Sean weaved his story deeper and deeper into our hearts. I saw how he carried his book, in it’s beautiful flourish, home.

If you want to read a memoir showing how a child can survive great trauma, dropping out of school in the 7th grade, and then grow up to marry, become a musician, public speaker and writer, read Sean’s book.  If you want to laugh or need some solace, look no further.  If you want to read a well written book, you will love Sean’s. Surely, this is a book I will need to read again, perhaps all in one day.

That book sounds really good! I'll have to check him out.

"Will the Circle Be Unbroken" is one of my favourite songs.