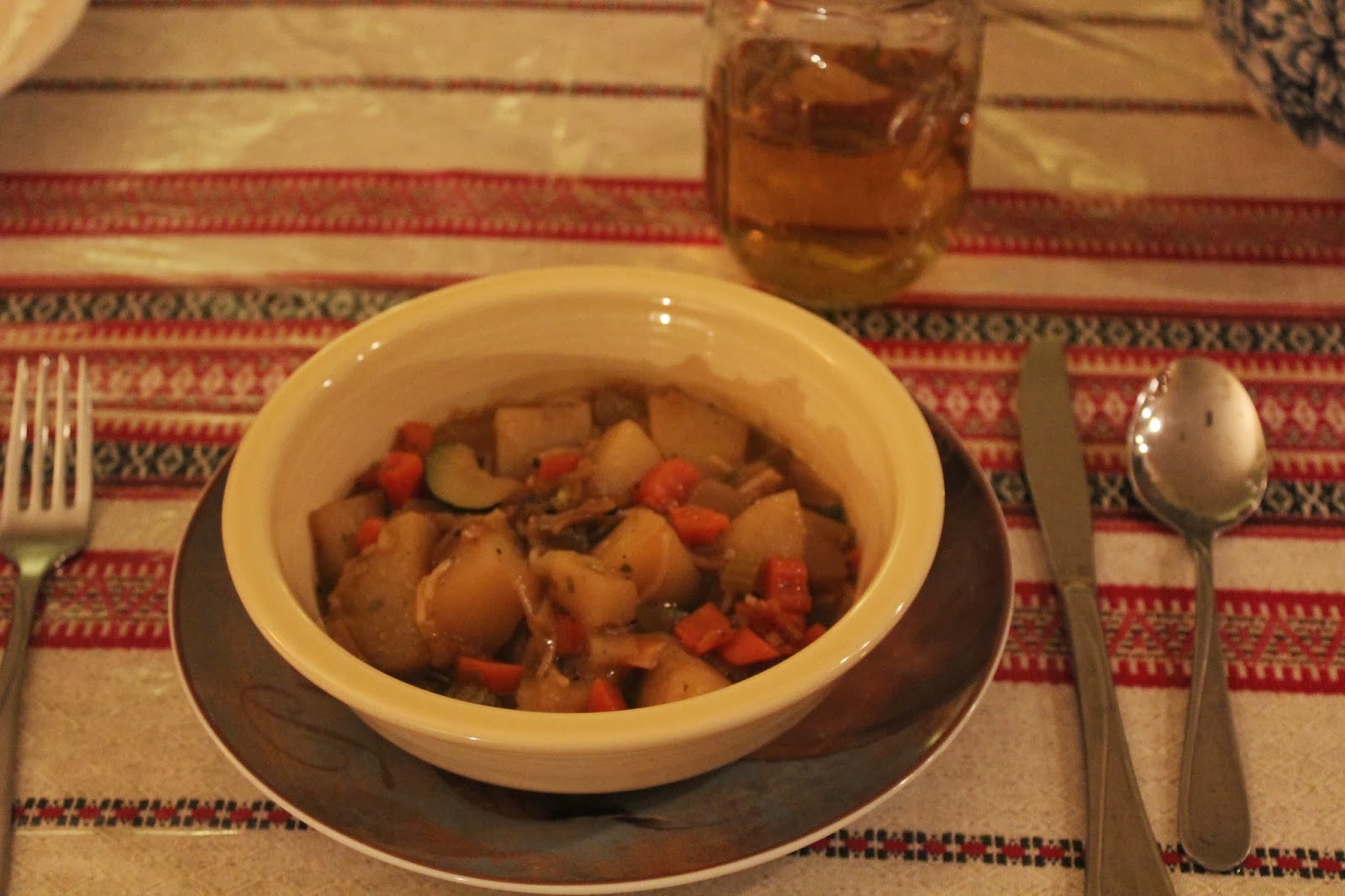 I started with this recipe from my friend Mary:
and used this mainly for the instructions that I copied and pasted below...
In the soup was:

instructions on order of how to make the soup:

Add the celery and, if using, any hearty vegetables (such as cabbage and fennel) and the bay leaf and thyme. Season again with salt and pepper and cook an additional 5 minutes. {...}
Add the broth, potatoes, and any quicker-cooking vegetables (such as asparagus and peas). Let the soup come to a boil, then reduce the heat to low and gently simmer, uncovered, until the potatoes can be easily pierced with a fork, about 15 to 25 minutes. Taste and season with additional salt and pepper as needed.

Towards the end I added the chopped zucchini, sometime in the last 15 or so minutes.

The soup mix really adds the flavour you were tasting; it makes it really a different soup entirely!

If need be, I think the oil could be omitted or
a different oil used if need be. 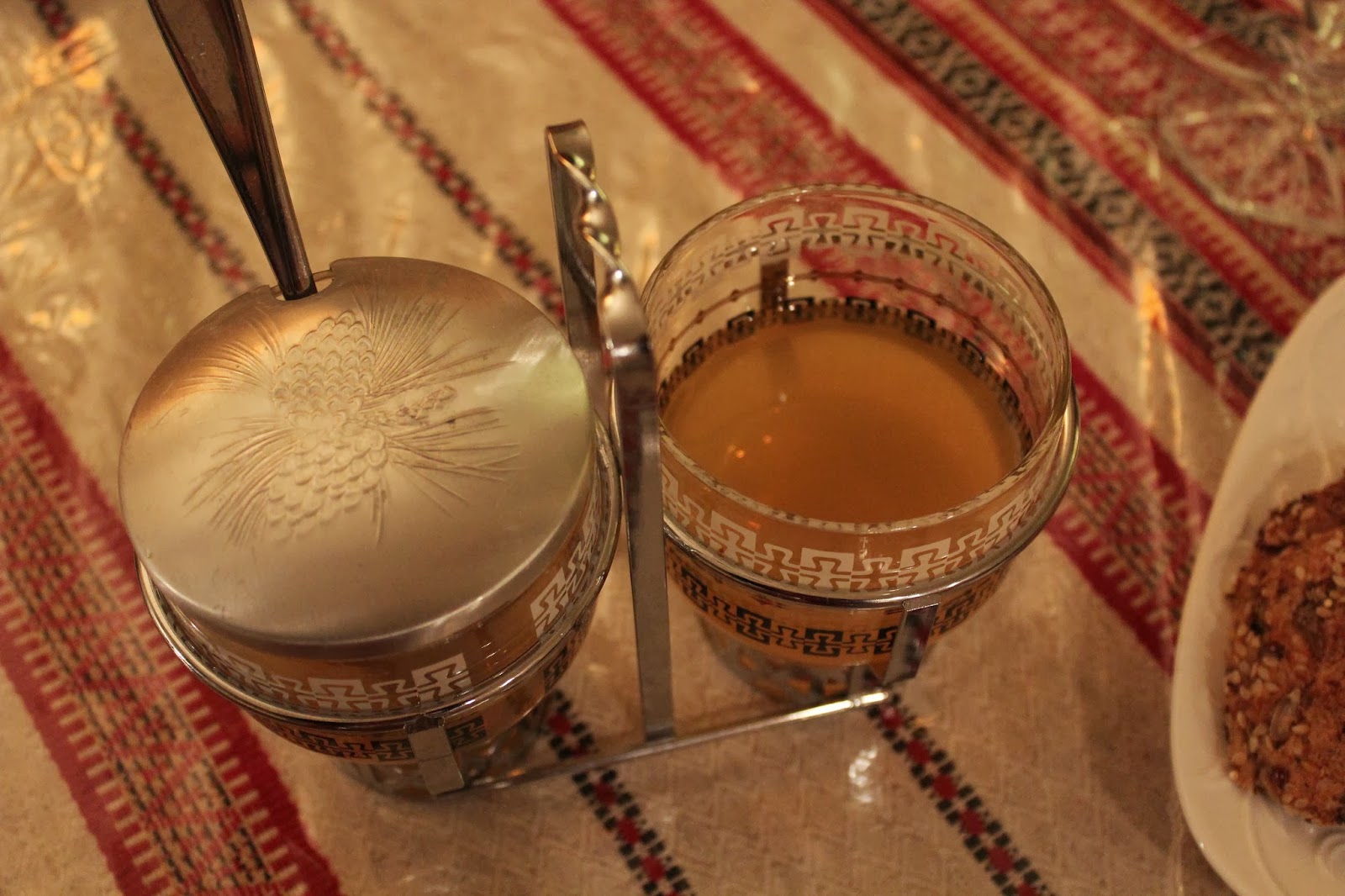 I made a non-oil dressing for salad:
half cup honey, half cup lemon juice.
From this cookbook that
I used to make the wonderful
vegan chocolate cookies! 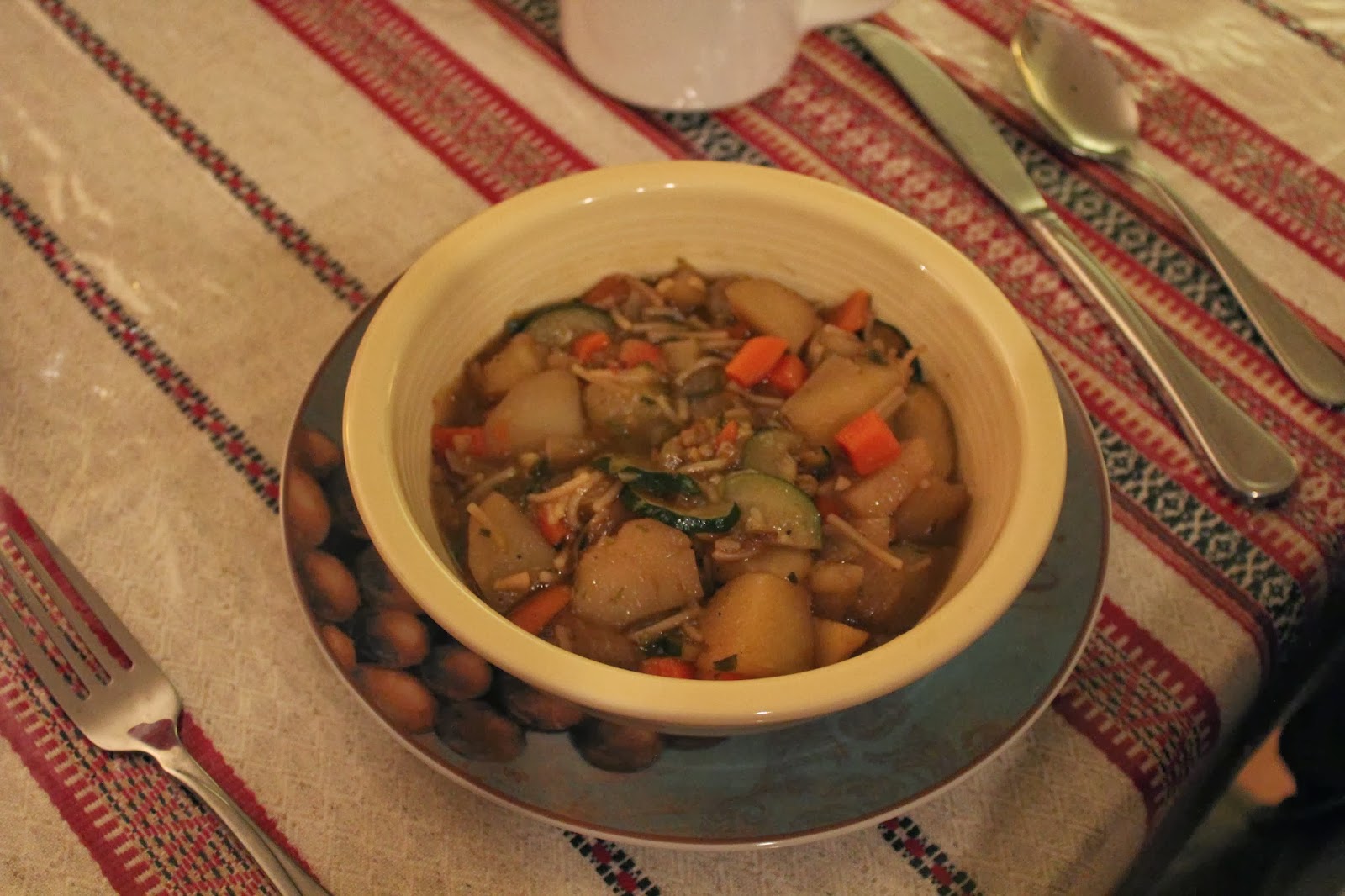 The soup was good!
it is NOT GF though, FYI. 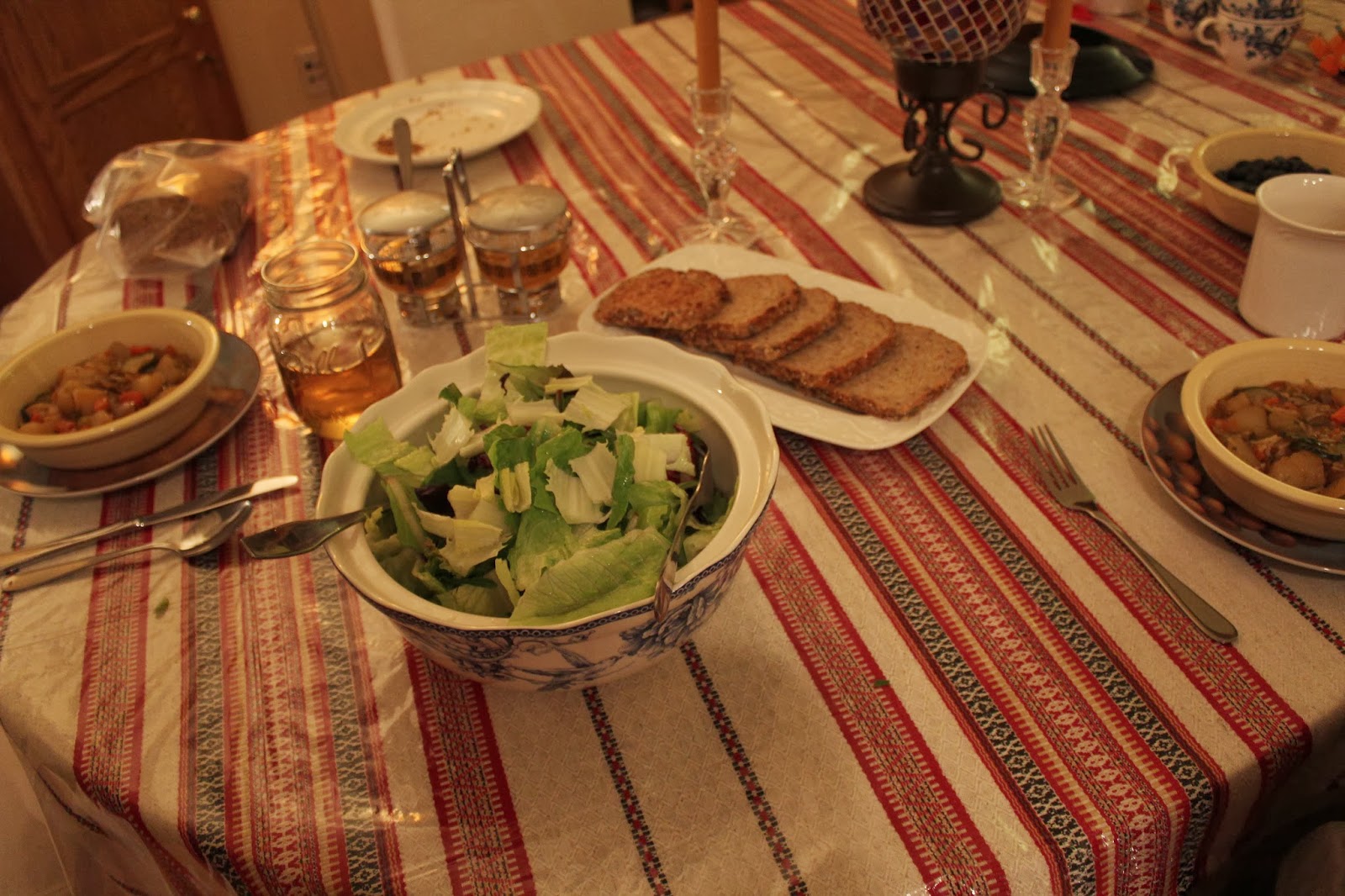 I am hoping to make Lenten fare like this
for Lent.
This meal was made during the three weeks before
Great Lent began.
Posted by elizabeth at 10:00 am

Have you gotten Mark Bittman's root vegetable soup? J-M at church gave it to me a few years ago and it is fab, esp. at this time of year when the fresh veg is scare on the ground. (And since I seem to be in a recipe sharing in the comments mode today, here it is:)

From How to Cook Everything Vegetarian, by Mark Bittman

2 tablespoons neutral oil, like grapeseed or corn, or canola

8 cups vegetable stock (I use Better than Bouillon, Vegetable or No Chicken Base, depending on my mood)

About 2 pounds of root vegetables—turnips, parsnips, rutabagas, carrots, celery, waxy
potatoes like Yukon Gold or fingerling, alone or in combination—peeled and cut into ½-inch
dice (I usually end up putting in more than two pounds, adding more broth if I need to)

Combine oil, onion, garlic in Dutch oven or large soup pot, let sweat a bit and get soft. Add remaining ingredients and cook until barley is soft and vegetables are cooked. You can add the beans at the last 10 minutes just to reheat if you are concerned about mushiness. Lima beans also work well. This makes a big pot! And it freezes okay.

It also works well to do in the crockpot. If making this way, just put all ingredients in the pot (don't saute anything first) and put on high for 6 hours, or low for 8.

I know you meant "until simmering," but I think it would be really nice to have your saucepan shimmering! ♥ I think zucchini sounds like a wonderful addition. Do you like mushrooms? They're a favorite in our house.

The recipe Juliana shared sounds great (with barley), too.

Martha: hmmm, that is a question; was simmering or shimmering meant? that part was part that I copied from the online recipe (which is why it is italics)... I am still wondering if they meant shimmer since it was for the oil?

Thank you for the recipe! I adore to eat soups. They are so simple and so nourishing at the same time.

I think the original, "shimmering" would be right for oil. We don't usually simmer oil, do we...? Not that I am sure what shimmering oil looks like, either....maybe that's when it starts to quiver a bit, before it starts to smoke?