reflections on a sermon and sickness 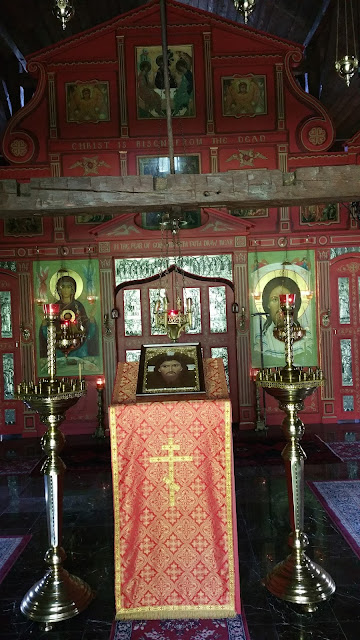 On the first weekend of the Dormition fast for us,
Mr. Husband and I heard a sermon that was
about sickness and forgiveness.
*
I've been pondering it a lot since I heard it.
*
About how really hurting people are so wounded
that they hurt others
though it was not their intent...
that we must forgive them,
must forgive everyone,
that we must love and that forgiveness and love is
what we most need to do...
*
First it was about a story of the priest's
relative who died years ago and
who had a dysfunctional family life
and the one parent really failed her a lot.
The child grew up and was
very successful, interesting, had a great family;
but she could never forgive the parent who so
deeply failed her.
*
The priest told this woman, who by this time was old
and dying, that she must forgive her Mother....
that her Mother was sick, was doing the best she could,
and did not intentionally try to hurt her...
that it was the chain that she was dragging through her
whole life was her unforgiveness towards her Mother.
The priest left and just a few days later,
his cousin died and he got a call to pray for her soul,
she had died only 10 minutes ago
and had a message for him:
you're right.
*
So she forgave and was set free....
*
I am thinking a lot about that
and the understanding that people are often really sick and
are not meaning to either fail people the way they
are failing or hurting them...
*
And the call to forgive...
Posted by elizabeth at 8:00 am

Email ThisBlogThis!Share to TwitterShare to FacebookShare to Pinterest
Labels: on forgiveness

This was such a "profitable word" for me today - thank you.

Yes - we can know a person's sin, but we cannot know the extent of their guilt. We're all sinners and it's so much easier to see the fault of the other.

There is great truth in this. Thank you for the reminder!

Thank you for sharing this! My priest once told me that we would never dare to judge another person if we knew the dragons they were fighting to slay in their own lives. Reading and hearing things like this always helps me to "let go" a little and remember to forgive.

Yes. I too have thought about this a lot in the past several years, especially with the death of my mother-in-law. Thank you for sharing.

I highly recommend "Still Alice" by Lisa Genova, about a woman who develops early onset Alzheimer's. The relationship between Alice and her daughter Lydia is tenuous, but develops beautifully as the story progresses, as someone who is sick gets worse, it's hard to know what to do, but just to be there means a lot.