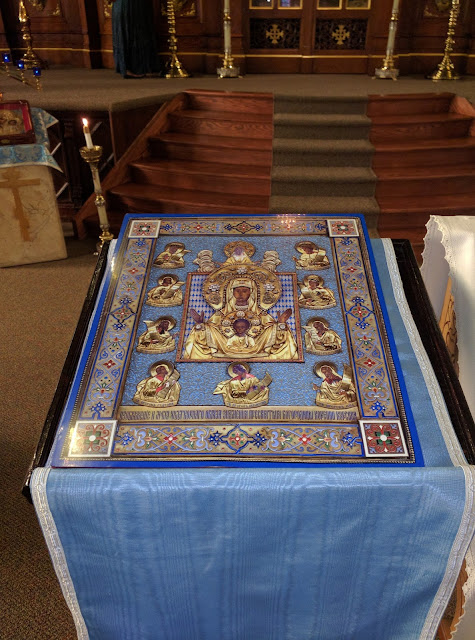 We went to liturgy this morning...
Tomorrow is my husband and I's 4th wedding anniversary!
I hope to write more about this later, but for now,
these two things:

"The Lord always blesses me for our anniversary + St Phanourios celebration!

This year I ordered 2 fillets of salmon as we are unable to have a full Slava this year.

Only one of the fillets was in the package! Ack!!! I was going to prep them today. ...

called our grocer immediately and the person could see

that the mistake was indeed made.

They not only are they crediting the cost, t

hey are giving us an additional credit and 2 new fillets tomorrow!

What a blessing! Thanks be to God!"

And a bit more from my latest essay, for your encouragement:

"Elizabeth Goudge also speaks of what faith, in such moments, can look like. She describes, in The Middle Window, a man fighting in the highlands of Scotland, who nearly died before a kindly couple took him in, nursing him back to consciousness and health. He, having thought his life over, now had to come back to life, and realizes what troubled him most is his loss of faith. It is then that he realizes, “[f]lames may die down but nothing could rob one of the ashes” and that, perhaps, “he was, for the first time in his life, actually experiencing faith. This fighting with no certainty that there was anything to fight for, this going out into the night with no belief that dawn would ever come, was…the real thing…”(Goudge, 200-201)5."

Read the rest here.
Posted by elizabeth at 11:39 pm

happy anniversary!! may you two be blessed with good health and happiness always :)

Wishing the both of you a Happy Anniversary!

That is like your own personal version of the "loaves and fishes" story!!! Wonderful blessings to you on your anniversary :)